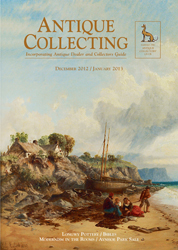 This issue sees the end of a tough trading year and the beginning of another anxious one. Collecting may be a lightweight indulgence, an expense that can be postponed until better times prevail, but it is deeply rooted. To postpone its pleasures causes the appetite to sharpen. What is more, opportunities become more numerous as bargains reappear. It is ironic that at a time of austerity the means of acquisition have never been easier, not so much in traditional retailing as electronic availability at the touch of a button. Promoters can inform and illustrate pieces to potential buyers without a spoonful of petrol being consumed.

The ether seems to prevail; the year has seen no diminution in TV programmes devoted to antiques. They have become a substantial sector of current programming. The indefatigable Tim Wonnacott of Bargain Hunt must be present on screen more than anyone. He shows no sign of flagging other than the occasional humorous grimace of self parody at the viewer. Paul Martin continues to enthuse over the frequently trivial amounts realised in Cash in the Attic. Fiona Bruce maintains a keen presence as the Roadshow circulates with stately dignity on its country house schedule. Other programmes in which buyers compete and further contests are devised fill the repetitive listings of diminishing TV invention. Theoretically, antiques programmes have the merit of satisfying documentary, romantic, historical, avaricious, nostalgic, acquisitive, artistic and aspirational emotions at modest cost. It is no wonder that they are kept on the front line.

At this point, however, one starts to wonder if the world of antiques is going to follow that of other collectors, like the film concept called UltraViolet that offers an entirely ethereal library of films accessible by computer or television set plugged in anywhere. To gain access one buys the film not as a solid CD or DVD but by adding a title to one’s own celestial library, established somewhere in the UltraViolet promoter’s space. Books are already in this state, making libraries redundant; now it has come to films. How long will it be before a collection of antiques is an entity of images accumulated by paying for the same sort of access as that for films but of selected 18th century porcelain or early oak furniture or Georgian silver? In the limited space the modern home affords this would have the advantage of providing a personal selection without requiring storage. Subscribers could assemble their own art collections without the need for walls. In practice, of course, the avaricious reason for collecting – that of hoping to make a profit from it – would not be satisfied. And the pleasure of keeping your socks in a period chest would not be granted. But a collection could be assembled in the same way as a film or book library, without taking up shelves or rooms.

To get back to reality, impressive in the TV programmes are the auctioneers, men and women of detached views who show only occasional enthusiasm. Their opinions come as a cold douche of reality, like judges at a sentimental dog show. Twenty pounds, they estimate, for a brass monkey bought for eighty; we get a lot of those. They do not play games; they are touchline judges at screen entertainments aimed at a wide audience additional to one that attends markets, fairs and other antiques events. There are also many courses, weekend seminars, lectures, holiday excursions and hotel promotions entirely given to antiques and education about them. A look at the internet and the TV screen creates the impression that the world of antiques must, financially, be booming. Which it isn’t. So has an interest in antiques become a spectator sport to while the time away, or is there to be another leap forward as this frenzy of viewing builds up to burst into a new boom? It would be good to believe the latter. Auctioneers and surveyors reported more action in the latter part of this year, but not enough to affect prices yet. That is why our fingers are tightly crossed as we wish everyone Merry Christmas and a Happy and tangible New Year.