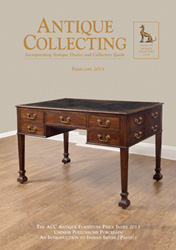 Our Chancellor of the Exchequer, in his Autumn Statement, set out an unchanging economic vista for years to come. A steady, unremitting trudge through a landscape of penance for overindulgence and poor housekeeping should be undertaken until books balance, debtors are paid back, and a trickle of positive income comes in. The gloom one associates with thrift and domestic restraint followed his exposition. The idea that not only is the party over, if it was a party, but that parties are off for the foreseeable future is not one that is easy to swallow.

Yet at the same time that our Chancellor was painting his subfusc picture, an Aston Martin DB5 sold for £185,000, several auctions reached new records, Asian art was selling like hot cakes to new Chinese buyers, a Raphael drawing fetched nearly £30 million and contemporary art auctions brought astonishment at sums paid for works of bewildering appearance. The demand for early English porcelain remained unabated. Even some mahogany furniture sold at auction. Thrift was not the first impression one derived from these events. Like normal Italian practice, they suggest another economy independent of the one attended to by the Government. It is heartening to feel that despite muffled official trumpets, cheerfully irreverent music is to be heard from the streets and from the lairs of offshore buccaneers.

One of the explanations is that official statistics are notoriously inaccurate. When economists and politicians rant about the significance of half a percent growth or half a percent drop in national activities, they are arguing over figures that may be revised either way within a short time of their issuance. The collation of so many statistics from so many sources is complex. The smoothing of anomalies can confound accuracy. Half a percent is well within the margins of error. In the time of Harold Wilson the import-export imbalance was held to be vitally important and our deficit a source of constant, even daily, harassment. After quite a long time of agonised breast-beating it was found that exports had been understated and imports overstated, so the deficit was not quite as bad as it seemed. Revisions have already been made to economic results of last year, one of them rather more positive than was thought at the time.

The statistical aspect is relevant in this issue dealing with the ACC Antique Furniture Price Index for last year. We would not claim that it is an absolute measure, but we have been preparing the Index since 1968, which is rather a long time. Since the methodology is consistent and the same judgemental elements used, its value is in terms of comparability. The raw statistics are much easier to obtain now than they were at the outset, since the computer and the internet provide instantly accessible data that 40 years ago had to be painstakingly assembled from widespread sources, some of them still relevant. With hindsight we might have included pieces of furniture that were not important at the time but have since become popular. We avoided museum examples from great cabinetmakers but could not foresee that some pieces then considered good middle-range examples would become scarcer and much more expensive. Things change. But on the whole the selection remains representative and the trends unmistakable.

In the second volume of his enormous assembly of art and antique price movements, The Economics of Taste, in 1963, the late Gerald Reitlinger provided a compendium of facts about the ebb and flow of prices of objets d’art including furniture over two centuries. At the end he remarked that a crystal ball should form no part of the library equipment of a historian of taste. The recession then affecting world trade did not affect the art market, ‘not even the dizzy-headed market in modern painting and sculpture’ because the financial situation was less important than the political one, in which revenue concessions in death duties and tax kept the art market alive. This, he remarked, could change very quickly. In deference to him, therefore, we will make no forecasts and will watch the Chancellor’s political situation keenly. After all, the situation seems to be much the same now as it was then.