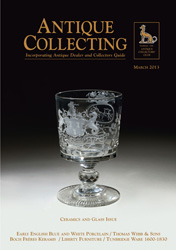 In an issue given to mainly ceramics and glass, but including Liberty furniture and Tunbridge ware as well, it is timely to remember that our last survey of subscribers revealed that of the respondees, approximately 40% were interested in porcelain, 27% in pottery and 22% in glass. Short of furniture and paintings, these are important proportions of our readers, some of whom will be interested in all three. The preponderance of porcelain is perhaps a reflection of the quality of 18th century English soft paste porcelain, which provides a rich selection and historical fascination to absorb the collector. It never ceases to surprise me how often there is a new discovery from research into one of the celebrated porcelain makers of the 18th and 19th centuries. For instance, Simon Spero’s annual catalogues make fascinating reading as they provide expert comments on collectors, makers, designs and sources of new information. One would have thought that most of what can be discovered would have already come to light, but it is not so; like the history of the country, new perspectives are regularly brought to view.

Although pottery has a more modest following, it too is by no means without new discoveries. The regional and local nature of pottery production left its makers much less recorded and therefore a rich field for researchers. It is especially prominent in the archaeological examination of past cultures; one does not have to be a devotee of TV’s Time Team to know the excitement generated by unearthed sherds of pottery. Glass, too, at the individual level, is still ripe for discoveries. The annals of, say, Stourbridge, although laudably recorded locally, and elaborated by Charles Hajdamach’s article on Webb in this issue, have still to yield more detail of the craftsmen and forms of its glass-producing heyday. This is what gives collecting its spice. When the survey of collecting interests conducted by WikiCollecting was looked at a year or so ago, we found glass at number 37 in the scoreboard of popularity of collecting (antiques came second) but we searched in vain for pottery. Porcelain came 52nd, which does not follow the scale of our subscribers, who rate porcelain higher than glass. This perhaps reflects the difference between subscribers to this magazine and popular collecting over the 160 countries on which the survey was based. Bottles came 32nd and antique teapots 69th. Mystifyingly, ceramics were placed at 63rd, which alerts one to the contradictions of statistics. What does one include in ‘ceramics’ if it is not porcelain or antique teapots not made of silver and Britannia metal? Perhaps it really meant pottery.

Statistical anomalies apart, we can enjoy owning, looking at and reading about porcelain, pottery and glass without getting too partisan about its order of popularity. Owning is the predominant impulse of the collector and 18th century English porcelain is, for many of our subscribers, most desirable and at the top of the scale. When the ACC published Simon Spero’s Price Guide to 18th Century English Porcelain in 1970, most of its illustrated contents, from Bow to Plymouth, were under £50, but there was a Lowestoft polychrome coffee pot at £120-£160. Last month we published an auction feature on Russell Sprake’s sale at Lowestoft in November 2012 at which a polychrome coffee pot went for £6,900. A blue and white cream jug similar to one illustrated at £39 in 1970 went for £2,875. If there were an index with 1970 starting at 100, these latest values would indicate 4312 and 7372 respectively. On the other hand, other Lowestoft jugs and teapots with various but tolerable chips and cracks went for less than £300 in November 2012, giving a maximum index of 600. The point that the sale raises is the one to be found with most antiques across a variety of artefacts: the rare piece in good condition has far outstripped the middle-range, unexceptional piece in restored or imperfect shape. Those of us who have collected antiques for the simple pleasure of owning a typical period article may, if lucky, see a modest profit on our possessions. It will not compare, however, with the top-notch, rare and virtually perfect example. In this, porcelain, pottery and glass are no different from the others.