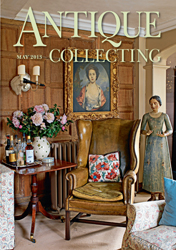 The annual survey of the art market in 2012 conducted by TEFAF (The European Fine Art Foundation) put its global value at €43 billion. This was down on 2011 by 7%, mainly due to a decline of sales in China of €31⁄2 billion. China was still second in importance to the United States, with the UK in third place. Despite a drop of 24%, Chinese demand in the art and antiques world has been dramatic, with bids we have recorded in News & Views causing consternation at auction sales. A whole new sector of the art and antiques trade has sprung up to service this Oriental juggernaut, with attendant fairs and specialist events.

Whereas TEFAF says that the Brazilians still buy mainly from dealers and galleries, the Chinese have a penchant for buying at auction, believing that this provides more choice at less cost. Significantly, their market is heavily influenced by a relatively small number of top collectors at the expensive end, with a larger bunch of buyers low down below the €5,000 price level. This suggests that the middle market has not yet developed, a feature not only of art and antiques in developing countries but also of many other products in the retail sector. Nonetheless, vendors in this country receive pleasant shocks when artefacts that have lain unappreciated since Great Uncle George brought them back from a sojourn Out East suddenly become examples of things the Chinese avidly wish to reacquire.

The TEFAF survey brings on a powerful feeling of deja vu. Many years ago (about 40 to be more specific) a market research survey in Brazil for a firm of middle-range UK cosmetic products found that the market exhibited precisely the same ‘missing middle’ profile as TEFAF have suggested about China’s art market. The absence of a middle market is often considered to be merely a stage in economic and retail development. Advice to prepare for growth in the middle sector is counselled. After all, it’s what we expect; developed markets have it.

Unfortunately the middle market has really suffered from the economic and social changes of the last two or three decades. It may suffer even more. I quote from Bryan Appleyard’s review in The Sunday Times of a book by Jaron Lanier entitled Who Owns The Future? (he is one of the Microsoft team). It trumpets apocalyptic alarm about the digital economy being based on an act of theft with which the victim enthusiastically colludes. The stolen goods are the information that becomes the primary assets of Google, Apple etc, costing them nothing and not enriching the rest of us. ‘As a result, the economy is being hollowed out. The wrecking ball of internet technology has already destroyed the musical middle class – the engineers and so on who used to make records – and is now threatening to do the same to all forms of publishing. Furthermore, the process has barely begun. Healthcare, transportation and ultimately the entire economy will soon be taken over by information-stealing software. More jobs will be destroyed and wealth will become more concentrated in the top 1% of the population. Present technology produces shrinkage rather than growth.’

The Chinese art and antiques market profile could therefore comply with this hollowed image without progressing – if that is the word – to establish a solid middle. The pattern is known to us, now. The top end of the market continues to set records; the bottom end is familiar from TV programmes, huge junk markets and boot fairs; the middle has shrunk to the withers along with the shops that served it. Practices and information are increasingly digital. And yet, and yet; the middle not only continues to exist in what may become a large cleft rather than a niche; it is versatile, adaptable and its roots go deep. We live at a time of great change but reactions to Lanier’s forecasts will occur, adding to their uncertainty. It is not time to write off the middle market yet. Brazil did eventually develop one; China may do the same; ours will probably recover in a different form. The future is not set in unyielding concrete. Optimism, as the Archbishop of Canterbury recently said, still exists.