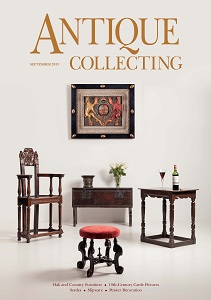 This Oak and Country issue of the magazine addresses a very traditional sector of antique collecting, one that is closely associated with the foundation of the ACC nearly fifty years ago. It includes historic design in its early stages of development, executed by craftsmen grounded in organic materials. In these eco-friendly days, the artefacts and furniture of the oak period inspire admiration for the knowledge of natural qualities they exhibit. Country pieces have a rustic appeal that kindles warmth towards the local materials used by their unsophisticated but skilful makers. The output of the 17th and the early 18th centuries provides the collector with a bright promise of richer things to come, as well as being remarkable for the objects in themselves.

Although the market for oak and country furniture has been affected by economic and domestic circumstances, the two categories have not suffered as steep a decline in demand as Victorian and Regency artefacts and furniture. There is a strong element of continuity that preserves their attraction. It is the opposite of the shock of the new that modernists enjoy, even though modernism frequently draws upon tradition. It is, however, entirely possible to like an eclectic mixture of periods without clashes that would have offended collectors of not so long ago.

Apart from a general survey of furniture, in this issue we also take a look at settles as seen by the confident eye of John Fiske, whose reference to 17th-century sources provides graphic contemporary comment on the practices of the time. The association of settles with firesides at inns and farmhouses is as strong as their unyielding seat surfaces. I once wrote apropos of them that ‘no man in a cold, sober condition would sit on a settle unless he expected shortly to get either very warm or very drunk’ and might have added ‘or both’, but that was an intemperate view of the 19th-century revival of the settle by vogue Morrisian reformers, made in a book of 1980. John Fiske is more balanced in his view of the origins of the form. His use of Samuel Johnson quoting Dryden lends cultural body to his customary treatment of the social context of his subject, a feature of his recent book When Oak Was New.
Rural ceramics are not neglected either. Robin Hildyard’s first of two instalments on slipware looks authoritatively at the methods used to produce the charming designs and politically correct quotations found on rustic pottery of village provenance. Rural cattle paintings are examined by Richard Kay in a sabbatical break from his regular appearances on TV’s Bargain Hunt, quite apart from a busy schedule as a fully occupied auctioneer. The decoration on early pewter articles is something we have not examined too closely in the past and David Houlston, of Bonhams Chester, has provided valuable illustration and background to the methods and sources of the decorations used.
The subject of oak and country antiques in wood, ceramics and metalwork along with painting is broad but not too academic or intellectual to deter the practical collector interested in obtaining things that are really old. So much of what has recently been redefined as antique belongs in reality to the category of bygones, that it is stimulating from time to time to be awed by handling something made three or four hundred years ago rather than the day before yesterday. This issue is unrepentantly dedicated to appreciating and understanding those early creations as well as the opportunities for acquiring them. We seem to be at the bottom end of a cycle as we were when the ACC came into being. Despite the reservations we have expressed about Government statistics being subject to revision, there is a whiff of optimism in the air. Perhaps another upward swing will reward those collectors currently
taking advantage of this situation, as did those who were the first members of the ACC. Good luck to them all!