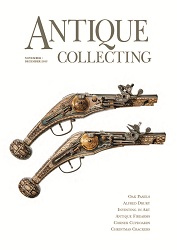 ‘In a society where statisticians thrive, liberty and individuality are likely to be emasculated. Statistics, which is no more than State Arithmetic… is a system used to enable rulers to know just how far they may safely go in picking the pockets of their subjects.’

At the end of a year in which the economic situation is said to be improving, one is tempted to look forward with hopeful eye. This is despite the fact that the economic improvement is of a derisory nature (growth of one percent) when compared to the economic losses of previous years (down five percent or more). It is also possible that given their notorious unreliability, the statistics may be revised.  If one were to ignore these trifling percentages, listen to the opinion of most economists, and look at the overhang of colossal debt we have incurred, hopes and aspirations would be squashed by the menace of a financial tsunami of towering size.

Where does this situation leave antique collecting? All the more surprising that the activity has survived, even if diminished in the middle range. At the top end, the concentration of wealth observed by social and economic reporters generates record prices for prized trophies.  It is in the middle that survival, even if at lower volumes, continues to confound doomsayers. For society’s best paid one percent the boom years have never stopped, whilst the middle class, on whom much of the domestic antiques business depends, have suffered the longest squeeze in living memory. Due to technology and the free flow of information, many secure jobs are disappearing. The era of the prosperous detached-house, well-educated, hardworking, thrifty, socially stabilising middle class is said to be over. The parallel in the world of antiques is clear, with new records being spent at the very top whilst the middle languishes and the bottom seethes in Hogarthian squalor. It is a time when opportunities have to be seized.

Things like silver, jewellery, fine porcelain and high-value artefacts continue to attract. Furniture is still very shaky. An illustration can be taken from BBC’s Bargain Hunt. The experienced Tim Wonnacott and his daily auction experts incline to a humorous realism that still allows enthusiasm to break through. In August, one of the contesting pairs in the game acquired an Edwardian Sheraton-style mahogany cylinder-top writing desk on tapering legs for £160 as one of its three bargains. Tim Wonnacott was dismayed. “You have paid much too much”, he groaned: £160 is way over the top for a competent piece of second-hand furniture of no great age. The piece then sold at auction for £220, to the delight of the contestants and the amazement of a genial Tim. It was a salutary example of how far the market for such pieces and trade expectations for them have fallen. A combination of straitened domestic economics, transient fashion and cultural change has drastically diminished, by at least half, the price that would be expected a decade ago.  The participants in the game, however, sensed the bargain that the piece had become.

It is hard to believe that the middle majority will take dismal forecasts of their continued reduction meekly. Economists say that in both the USA and Britain the middle isn’t just being squeezed, it is actually shrinking, with downward effects on lifestyle. The destruction of returns on savings adds to the pain. In London, house price increases reflect the dominance of top earners and resident plutocrats in a preview of what would be a false recovery based on house price inflation, although recovery is said to be broader based. When the virtues of thrift and hard work are devalued, social instability is usually predictable but investment alternatives become attractive. I wrote in May that optimism still exists, and it does. So do not stop collecting and do not listen too much to experts. No economic forecast is ever exactly right, except by chance. The recovery is fragile and an upheaval is becoming very likely, even if its timing is uncertain. But only a pessimist lets things grind on as they are.