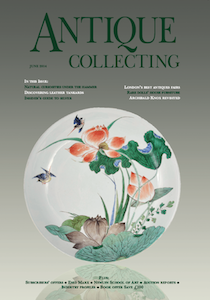 The advent of summer fairs, with London events listed in this issue, is always welcome. For collectors there will be wonderful things to look at and, if pockets permit, acquire. For many exhibitors the fairs are a high point in the year and inevitably a source of anxiety as well as anticipation. The success or failure of this short season of festivities and exhibitions tends to affect the morale of the trade and collecting community to an excessive degree.

This year there is much more anticipation than anxiety. Optimism is seeping gently into the world of antiques. Although reservations persist, there is definitely a brighter mood in the air. It used to be the case that the housing market influenced the turnover of antiques, with housing sales activity acting as a stimulus. We all know that the housing market is now briskly overheating but the relationship of housing indices to those of antiques separated several years ago. A more interesting relationship used to be that of annual percentage changes in furniture prices as charted by the ACC Index and the Council of British Industry (CBI) Business Optimism Survey. They followed each other, as charts published up to 1990 showed. The closeness of the two was quite uncanny. It seemed that people bought antiques when they felt optimistic and refrained when times were hard. Nothing terribly original about that, you might say, but it is always reassuring to see how statistics mirror practical activity. Currently we are being told that things are getting better economically so the mood is lightening, despite warnings from the Stock Exchange that there will only be a gradual improvement, not a boom.

Apart from housing activity and business optimism, there are other factors that influence the morale of the antiques community now. Fashion plays a larger part than it used to. Taste is less traditional. Foreign design and modernism have established more influential roles, not always with clarity, as our survey of last month showed (Icons Revisited, May 2014). Despite the variability induced by these additional factors, an underlying belief in the wisdom of acquiring good quality things in traditional taste appears to be reasserting itself in what has been a reticent audience. It is an audience unimpressed by fashion and is not particularly young. If it has started buying again, things are definitely getting better.

James Storm, in a 1989 article in British Antique Furniture, 3rd Edition, asked tongue in cheek whether the word fashion was ‘a euphemism for what can be bought cheaply by home furnishers’. This aspect has undoubtedly played a strong role in the ups and downs of various styles and periods. When it became so costly to buy antiques, lower-priced modern design undoubtedly moved in. Now that an enormous adjustment has taken place, it will be interesting to see if we are in for one of the apparently erratic swings that were the case 20 years ago, or whether the optimism is premature. It is held by economists that in a free, unregulated market there is always oversupply. Right now there is no shortage of antiques but there appears to be a shortage of affordable housing due to regulations affecting land and other factors. Young people are unable to buy somewhere to live and the need for furnishing is choked back for lack of first-time buyers, affecting movement throughout the chain. When they do manage to set up house, a lack of funds will dictate their interior décor. If provincial auction sales continue to be an observable source of cheap furnishing, another change of ‘fashion’ in James Storm’s terms may well take place.

This background to a cheerful month of displays of remarkable, high-grade artefacts and collectables is an encouraging one. The top end of the business has escaped the decline experienced by the squeezed middle and stringy lower end, so there should be plenty to celebrate at Olympia, Art Antiques London, and Masterpiece. If confidence is returning generally, especially at middle level, there will be much better reasons to start popping corks. If you are looking for a Father’s Day gift this month, can I recommend a subscription to the magazine? For this month only subscribers receive a copy of Paul Carter Robinson’s excellent 20th Century Pewter Art, Nouveau to Modernism worth £45 for free and this month there’s also an opportunity for subscribers to buy William Rau’s definitive book on Nineteenth-Century European Painting (which usually retails at £149) for just £44.70.