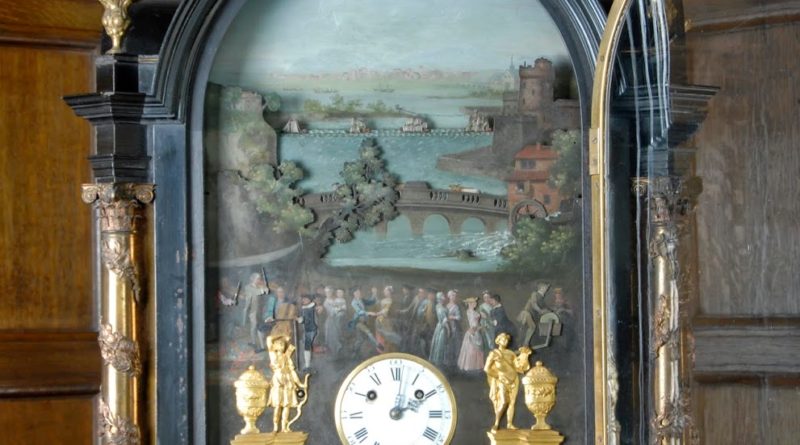 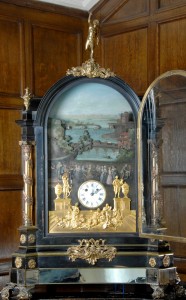 Following a £40,000 restoration and conservation makeover, a musical clock and automaton made in 1765 by royal clockmaker George Pyke will be on display at Temple Newsam House after being fully restored to its former splendour. Funded by the late Raymond Burton Charitable Trust, the Pilgrim Trust, Leeds Art Fund, the Friends of Leeds Museums, the clock, which before the restoration had fallen silent for the past 15 years, can now once again play its eight tunes from the Georgian period.

When the barrel organ is running, a host of different figures spring into action to animate a festive rustic scene on the clock face. These include musicians that begin to play, dancers which perform, a waterwheel that turns, dog and cattle that pass over a bridge and a fleet of ships that sail across a choppy sea.

The restoration included intricate work to the clock’s fine decorative metalwork. Gilt bronze figures of the gods and muses frame the whole scene on the clock face, and there are ornamental pierced panels at the sides which screen the mechanism. These are joined by flowers which entwine columns that support flaming torches while the figure of Mercury – the messenger of the gods – presides over the whole ensemble. 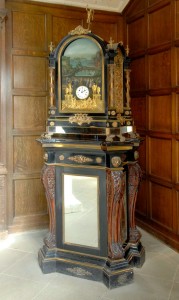 To mark the return of the clock which is thought to have once been the property of Queen Marie Antoinette of France and later the Duke of Buckingham and stands at 8ft tall, a week-long celebration will be held at Temple Newsam from Tuesday 28th April – May 4. This will include an opportunity on Thursday 30 April to attend a ‘Tea with the Curator’ talk and demonstration by furniture conservator Ian Fraser (to book tickets call 0113 3367460).

The return of the Pyke Clock to Temple Newsam House follows the recent news of the Oakwood Clock, another Leeds landmark, returning to its position at the edge of Roundhay Park after extensive restoration. The restoration of the Pyke Clock is the latest high-profile project to be carried that is dedicated to saving the priceless works at Temple Newsam House. This particular project was undertaken by Temple Newsam conservators and specialist conservators and students of West Dean College, Sussex, the only place in the country which could handle such a complex job.

Osmondthorpe Resource Centre’s creative writing group have also been using the Pyke Clock as inspiration while working with the team at the House to explore the clock’s silence to its restored movement and sound. This project forms part of the wider work that Temple Newsam House’s community team carries out using the history and collections of the House to develop the skills and knowledge of local residents and groups and showcase their creative talent.

Councillor Lucinda Yeadon, Leeds City Council’s executive member for digital and creative technologies, culture and skills said: “We are delighted to welcome back the historic Pyke Clock to Temple Newsam House after a restoration programme that has returned one of our most iconic pieces to its former glory.

“To mark the return of the Pyke Clock we will be holding a week of celebrations from the 28 April which including the chance to hear from expert furniture conservator, Ian Fraser.

“A range of partners worked extremely hard to find the funding for the project, and I would like to thank everyone involved for their contribution and support in making this restoration a reality.”