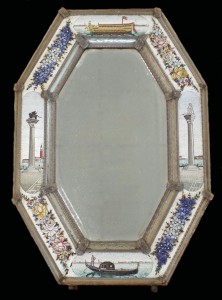 A late 19th century Venetian glass mosaic mirror, reputed to have once been part of the splendid furnishings inside Lowther Castle near Penrith, has sold for £3,100 at a Shropshire fine art auction house.

The mirror went under the hammer at Halls’ 500-lot auction of fine furniture, European ceramics and works of art in Shrewsbury on April 15, where it was snapped up by a Worcestershire buyer.

It was reputed to have been sold at the Lowther Castle auction in 1947 when the sixth Earl of Lonsdale was forced to sell many of the family’s treasures to clear the debts of his brother, the fifth Earl.

Belonging to the Lowther family, latterly the Earls of Lonsdale, since the Middle Ages, the castle closed in 1937 and was used by the Army’s tank regiment during the Second World War. Its contents were removed in the late 1940s and the roof taken off in 1957. The shell is still owned by the Lowther Estate Trust.

Star of the furniture section was an early Victorian mahogany pull-out dining table that sold for £3,000 to an Irish buyer, while a handsome George I style walnut chest on stand attracted keen competition before selling to a Shropshire collector for £2,800, four times its estimate.