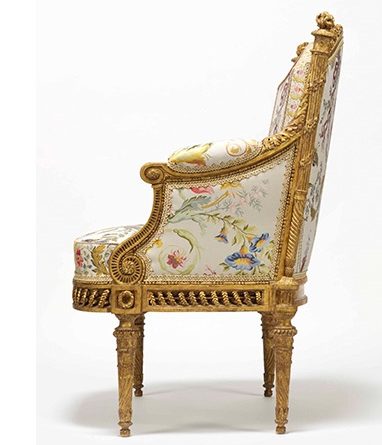 Christie’s is to hold a landmark sale of 18th Century French decorative arts, entitled Taste of the Royal Court: Important French Furniture and Works of Art from a Private Collection, including Marie Antionette’s armchair from the Pavillion Belvedere – the only one to survive from the most expensive suite made for the French queen.

The furniture and works of art in the collection, many of which are at auction for the first time, were created for some of the most celebrated patrons of the 18th Century: Queen Marie Antoinette, Duke Albert de Saxe-Teschen, Jean Baptiste de Machault d’Arnouville, Chancelier de France and the Prince de Conti, and subsequently entered such legendary collections as those of the Dukes of Hamilton, the Marquesses of Bath at Longleat and the Comtes de Vogüé at Vaux-le-Vicomte.

This group is seen as a celebration of the timeless beauty and international appeal of French 18th Century design, with works by master craftsmen such as André-Charles Boulle, Charles Cressent and Adam Weisweiler. 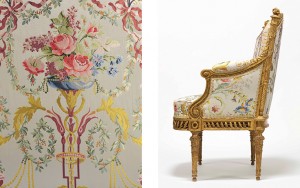 A royal Louis XVI giltwood fauteuil en bergère which was made for Marie Antoinette by François II Foliot, after a design by Jacques Gondoin in 1780, with sculpture by Pierre-Edme Babel or Toussaint Foliot, is one of the many very rare highlights exemplifying exceptional provenance within the collection (estimate: £300,000-500,000). This exquisitely carved fauteuil en bergère is the only known surviving armchair from a suite comprising eight side chairs and eight armchairs which were ordered in 1780 for one of Marie Antoinette’s most personal retreats, the Pavillon Belvédère in the ‘Jardin Anglais’ of the Petit Trianon. The French Queen requested seat furniture ‘in the very latest taste’ and the court designer Jacques Gondoin provided her with a wax model for the armchair, complete with upholstery samples; miraculously the model still exists and is now in the Louvre.

The suite is known to have cost 20,000 livres, which was the most expensive seat furniture ever ordered by the Queen and was later sold in the Revolutionary sales. 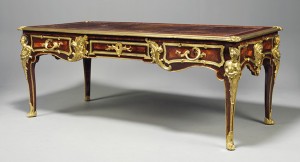 Unseen on the market since the early 20th century, the top lot of the collection is a bureau plat which is a masterpiece by Charles Cressent, who ranks with Boulle, Riesener and Gouthière as among the most famous craftsmen of the 18th century; he is one of the select few to be mentioned by name in sale catalogues and inventories of the period (estimate: £1-1.5 million). In contravention of guild regulations, Cressent cast bronzes in his own workshop, which enabled him to exercise an unrivalled artistic synthesis of bronzes and cabinet-making.

Cressent’s fame today rests largely on the extraordinarily sculptural quality of his gilt-bronze mounts and the appearance of a grand-scale bureau plat by Cressent on the market is a rare event. The precise form of the female angle mounts, known as ‘espagnolettes a têtes bouclées’, only occurs on one other known bureau plat by Cressent, in the Louvre. Works by Cressent have always been sought by elite collectors such as the Rothschilds and his furniture features in all the greatest collections of French furniture such as the Louvre, the Getty, the Gulbenkian Foundation and the Wallace Collection. 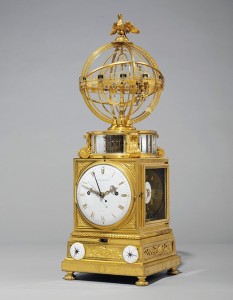 A remarkable Louis XVI Ormolu Planetary Clock (‘Sphère Mouvante’), the movement by Jean-Michel Mabille and the sphere by Martin Baffert, circa 1770, is a tour de forceof horological complexity (estimate: £600,000-1,000,000). It is so charged with technology that it may be viewed as an elite 18th century equivalent of the innovative 21st century products of Silicon Valley or the best watchmakers of today. In exquisite detail, the sphere displays the movements of the planets and the signs of the zodiac, while the super-precise equation of time movement displays the days of the week, month and year and even the phases of the moon, creating a veritable compendium of planetary and astrological information.

The clock was made for a cousin of Louis XV, Louis-François de Bourbon, the Prince de Conti, a famous general who at one stage was considered as a candidate for the Polish throne. The prince retired from court life following a falling out with the royal mistress Madame de Pompadour, concentrating instead on amassing a celebrated art collection which was housed in a special gallery in the Temple. This clock was included in a legendary sale held in 1777 following his death. His fame also rests on the Romanée vineyard he acquired in 1760 to which he added his last name; Romanée-Conti remains one of the most expensive wines in the world. 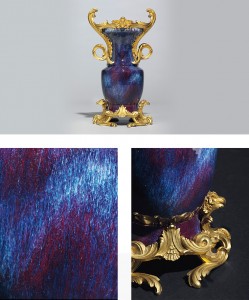 A spectacular Louis XV ormolu-mounted Chinese flambé-glazed porcelain vase, with sinuous rococo mounts attributed to Jean-Claude Chambellan Duplessis, circa 1755, was almost certainly made for the celebrated collector and financier Jean-Baptiste de Machault d’Arnouville (1701-1794) (estimate: £600,000-1,000,000). Machault, who as Contrôleur Général des Finances was Louis XV’s Finance Minister, oversaw the newly created porcelain manufactory at Sèvres and was a passionate collector of porcelain both from Europe and the East.

The mounts exemplify the work of Duplessis, one of the great artistic innovators of the period who was the principal designer and bronzierat Sèvres, where Machault would have had access to his talents. 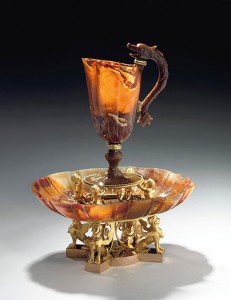 A rare and precious objet d’art from the late 1790s, combining a richly veined 17th century agate ewer and basin with fashionably neo-classical gilt-bronze mounts possibly by Pierre-Philippe Thomire, the design attributed to Jean Guillaume Moitte, has a remarkable history (estimate: £500,000-800,000). It is first recorded, following recent research by Patrick Leperlier, in a sale in Paris of the marchands experts Paillet and Delaroche in 1801, and was subsequently acquired circa 1807 by the Duke of Hamilton, who assembled one of the greatest collections of art in the 19th century. It is likely that he purchased this work in Russia when he was Ambassador in St. Petersburg. It passed by descent to his grandson the 12th Duke and was included in the legendary Hamilton Palace sale of 1882 after which it remained in the same private collection until 2005.

The ewer evokes the jewel-like kunstkammer objects so prized by princely collectors in the 16th and 17th centuries; its dolphin-form handle could suggest it formed part of the collection of the Grand Dauphin, Louis XIV’s heir, a celebrated collector of precious objets d’art, much of whose collection is now in the Prado Museum, Madrid. 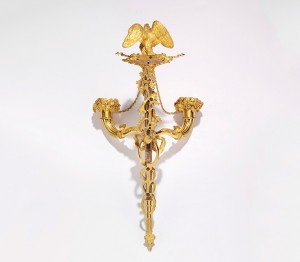 A pair of jewel-like Louis XVI wall lights, with Jupiter’s eagle surmounting a ribbon-tied caduceus-form backplate, are of the same model as a pair supplied to Louis XVI by Dominique Daguerre in 1788 for the Cabinet de Garde-Robe at Versailles, described in detail in an inventory of the room in 1792 (estimate: £200,000-300,000). Although the bill does not identify the bronzier responsible for these exquisitely modelled wall lights, they are likely to have been executed by Louis-Gabriel Feloix, who in 1781 supplied a set of four wall lights to the Cabinet Intérieur of Marie Antoinette at Versailles, which also feature remarkably similar cornucopiae-form arms and ribbon-tied back plates.