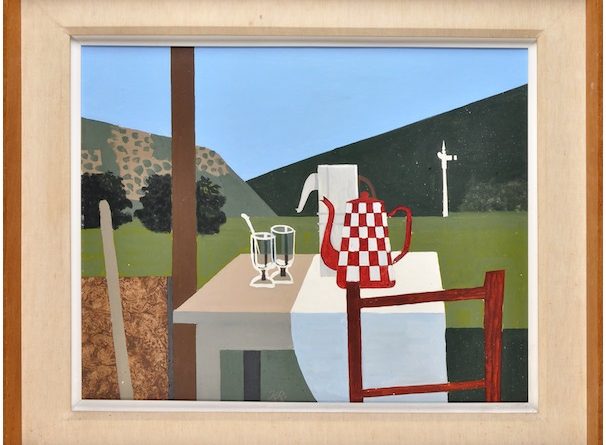 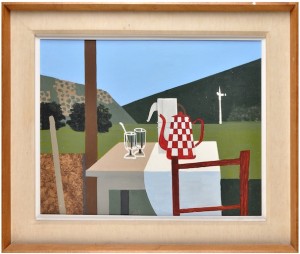 The highest price of the day was achieved by the Kenneth Rowntree oil Levisham Still Life, which went under the hammer for £8,200. It was one of three pictures in the sale on July 14 by the former Professor of Fine Art at Newcastle University, which made a total of £14,000.

The top-priced Norman Cornish in the auction dated from the 1960s and sold for £5,800. The picture, Newspaper Man, shows the headline ‘pound saved again’, in reference to gold stocks being sold off. A second Cornish, Three Men Drinking in a Bar, sold for £750.

Sandwiched between the two top North East artists as the day’s second-biggest seller was a 1956 signed and dated Picasso print, Femme Dans L’Atelier, which made £6,600.

Anderson & Garland director Julian Thomson, said, “The Picasso print sold in the room to a local buyer for well above its top estimate. We had a number of world famous artists represented in the print section, including Marc Chagall, Damien Hirst and Toulouse-Lautrec.”

The strong showing by the North East artists was expected but Scottish paintings were also among the highest-priced sellers. Three pieces by James Morrison went for a combined total of £8,500, including the £5,000 Low Water. Alexander Millar’s When Saturday Comes made £2,800 and Gadgie on a Bicycle with Two Dogs went for £1,800. A great example of a JoLoMo – John LowrieMorrisson – sold for £2,200, more than double its £1,000 estimate.

There were also some surprise big sellers.

Mr Thomson said, “One piece that really ran away was a drawing of peasants dancing by Czech artist Emil Orlik, who died in 1932. The piece had a pre-sale estimate of £200 to £350, but it attracted huge interest and went under the hammer for £3,800.”

There were some major surprises in the glassware section too, with a vase initially entered as part of a bigger lot with other pieces, far surpassing its pre-sale estimate when it was marketed as a single piece.

Anderson and Garland auctioneer Fred Wyrley-Birch said, “The iridescent pale blue glass vase by Paolo Venini for Murano had been place into the specialised Contemporary Art sale after it was discovered amongst a quantity of more household glassware. Although most vases by this artist sell for £80 or so this one got buyers excited straight away and sold for a hammer price of £3,200.

“He’s not specially well known but this was a particularly nice example of his work.”

In addition to artworks, the sale featured furniture, ceramics and vintage designer handbags.

“The pictures are always going to be the high rollers,” said Mr Wyrley-Birch. “But having design and quirky items as well gives a nice setting for the pictures. One goes well with the other.”

There was a strong interest in the designer handbags and accessories which included Chanel, Gucci and Dior examples mainly put into the sale by one collector. The highest priced was a Chanel fabric and leather bag which sold for £720.

The sale attracted bidders from around the world, with 36 per cent of sales made to online buyers, in addition to bids in the room and by phone.