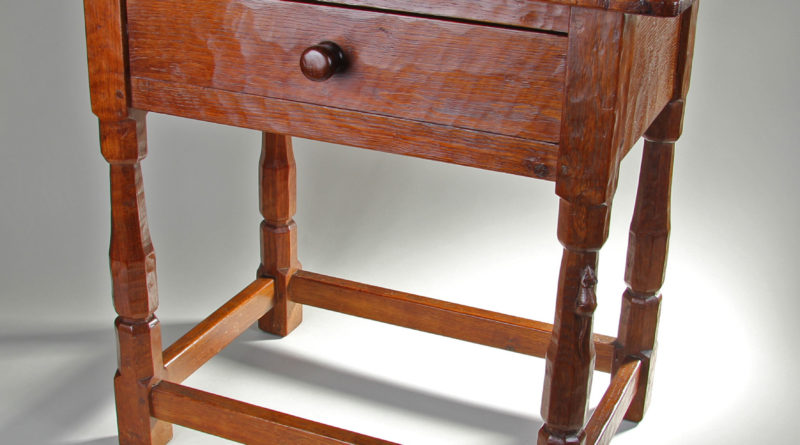 Antique Collecting considers the ongoing popularity of Mouseman furniture and what to look out for when buying one of the iconic designs.

The mouse, spotted running up chair legs, is arguably one of the most iconic trademarks in English Arts and Crafts furniture. First patented in 1931 by Robert Thompson, this little mouse remains the stamp of quality in a Yorkshire cottage industry still thriving today.

So why does interest in Mouseman furniture continue to grow and what makes it so instantly recognisable, in and out of the saleroom?

The firm of Robert Thompson’s Craftsmen Ltd had its origins in the Yorkshire village of Kilburn in the Hambleton Hills north of York just before the end of the 19th century.

Born in 1876, Robert Thompson was the son of a local joiner and wheelwright. After an unhappy attempt at an engineering apprenticeship in Cleckheaton to please his father, he returned to the family workshop in 1894 to pursue what was his true vocation – working in wood, specifically oak. He was inspired by medieval religious oak craftsmanship and, like the devotees in the Cotswolds, believed that the tradition of oak workmanship needed sustaining. He had to wait awhile making the gates, carts and general carpentry items of the workshop he took over in 1895 before he could progress to more exalted items. During this time he taught himself the use of craft tools and carving, always having higher things in mind. 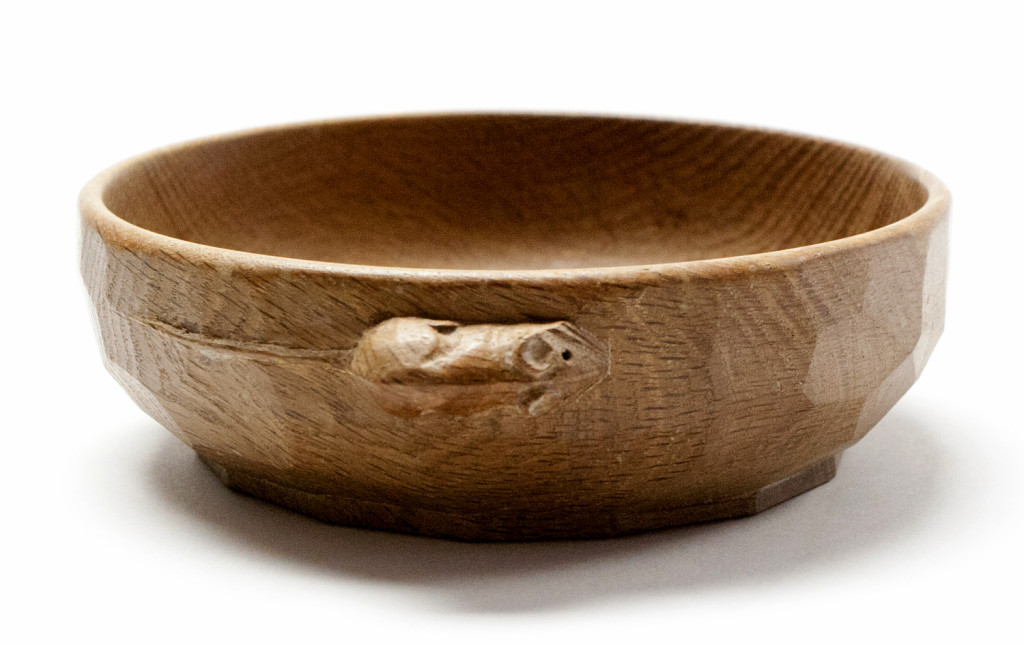 It was in 1919 that the Catholic Benedictine Abbey of Ampleforth provided Thompson with an opportunity. A commission to produce a memorial cross provided a link with the associated and well-known Ampleforth College’. This led to much refurbishing work with the school and over an extended period. Somewhere around this time, while working on the church with other craftsmen, carving a cornice for a screen, the concept of the church mouse, as poor as the saying, came to the fore. Thompson, liking the idea of modest skills pursued in in quiet places, used a carved mouse as signature on his work and the trademark was registered in the 1930s. From then on Thompson’s furniture has carried the ‘Mouseman’ label and the characteristic little carved mouse somewhere on the piece. It is a classic exercise in branding. 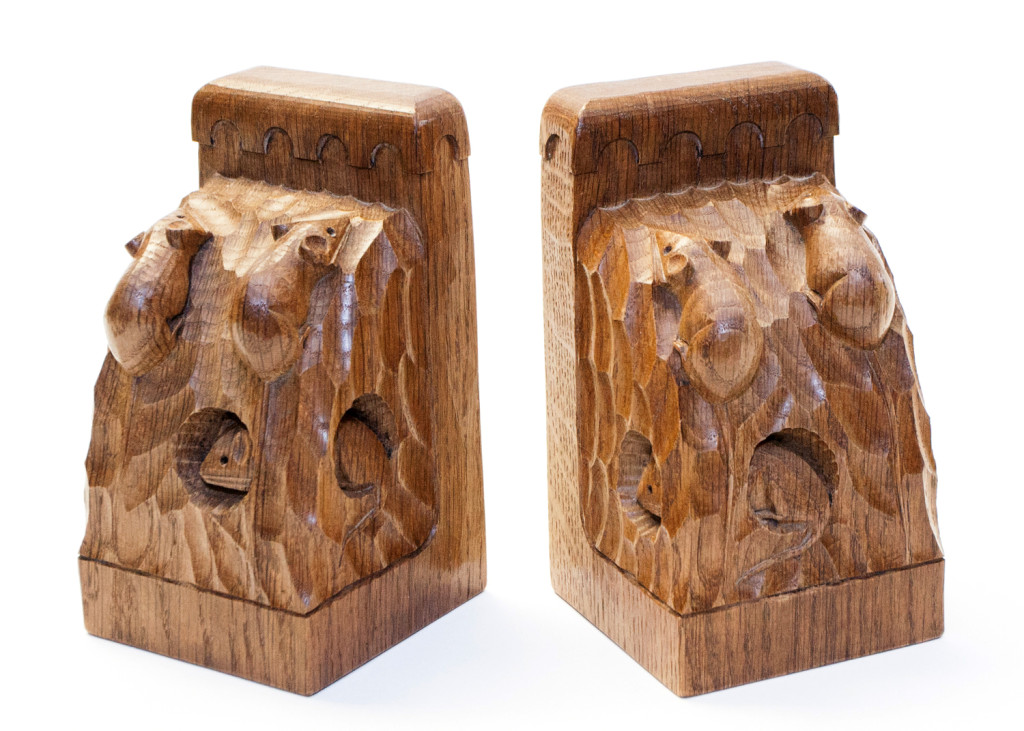 Even though Robert Thompson adopted the mouse as his trademark, not all the furniture created in the early years had it.

The mouse has also changed over time. Thomson removed the front legs from the mouse design in 1930 because they tended to break off easily. However, the clearly recognisable whiskers are important things to look for when you find a piece identified as Mouseman furniture for unfortunately, there are imposters.

Each Kilburn craftsman has his own individual style of mouse. The size of the mouse will depend on the piece of furniture. Carving a mouse is more difficult across the grain as opposed to along the grain. It takes around forty-five minutes to carve a mouse for a chair leg.

The finish that immediately provides the surface identification of the firm’s output is the adzed working that provides a slightly dappled ‘tooled’ effect which can be compared to the dimpling of beaten pewter, although of course it is shallow and gives just a slightly rippled finish. The material used is invariably English oak – Quecus robur – together with iron fittings and cowhide covering.

The patina of the furniture, the colour and degree of adzing, the use of a specific tool to shape the timber, also aid in identifying the pieces that weren’t marked with the mouse. 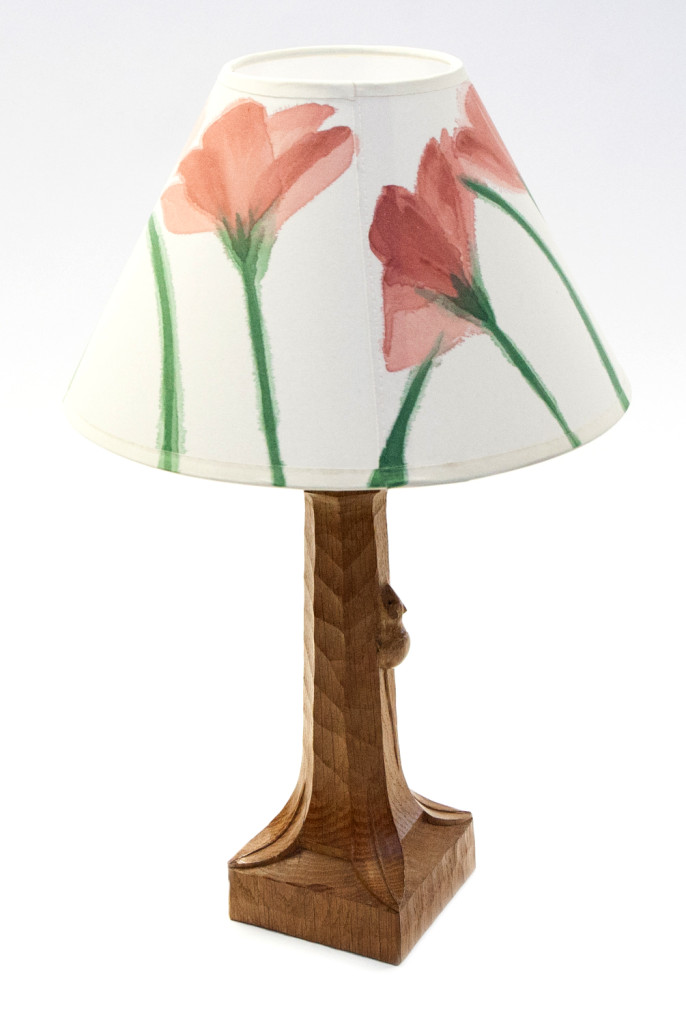 Approximate dating can be worked out by small changes in the construction.  For example, dowels are visible on table tops up to 1971, when animal glue ceased to be used and stronger modern adhesives came in.

Chairs changed in the 1950s to have a rush rail positioned between the bottom side rails rather than having a front rail between the front legs.

The ‘golden period’ was the 1930s when Robert developed his own unique style, with octagonal legs and the adzed finish.

The Second World War affected production as the majority of craftsmen fought, and most never returned.

By 1950 the firm was employing 35 men and apprentices. It had worked for notable architects and it had a range of furniture of its own, originated by Robert Thompson, who died in 1955. Pieces from the 50’s now have a wonderful colour.

The firm, Robert Thompson’s Craftsmen Ltd, continues to this day, run by grandsons of Thompson’s, appropriately surnamed Cartwright. The range of furniture made by the firm still concentrates on the dining room, bedroom and the occasional bespoke commission.

One thought on “Guide to Mouseman furniture”