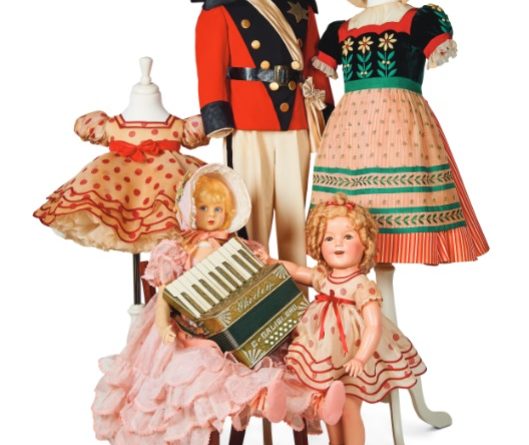 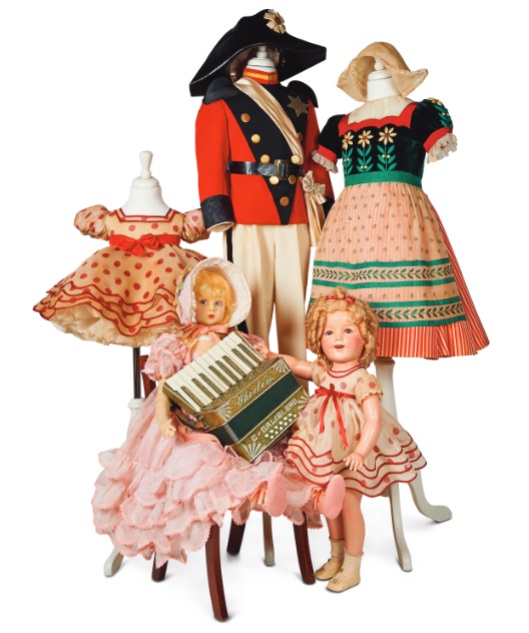 Theriault’s July auction, ‘Love, Shirley Temple’, featuring nearly 600 costumes, memorabilia and dolls from the former child film star’s personal archives gained global interest. The auction, conducted on July 14, was followed by an auction of antique dolls on July 15. The two days of auctions totaled over $4.2 million, a new record for the Annapolis, Maryland-based firm, Theriault’s, which specialises in the auction and appraisal of childhood memorabilia.

Temple’s 1928 birth certificate from the Santa Monica Hospital soared past its pre-sale estimate $300 to reach $5500 and will be returning to its hometown of Santa Monica.

A costume worn by Shirley Temple in the 1936 film Stowaway was won by a private donor for the Museum of Fine Arts in Boston. Other costumes will be exhibited by film memorabilia sponsors in Australia and Norway.

Her iconic tap shoes, worn during tap dances with Bill “Bojangles” Robinson, topped at $25,000 (pre-sale estimate $1500) and will make their home in an important South Dakota film collection alongside the famous Lenci doll known as “Pinkie”; the doll appeared in a rivalry scene between young Shirley Temple and Jane Withers in the 1934 film Bright Eyes (pre-sale estimate $2000, hammer price $14,000).

Stuart Holbrook, President of Theriault’s had earlier noted, “This collection was unique in its scope and having  been in the hands of the original family – first Gertrude Temple, then Shirley Temple Black, and finally her son and daughter – until this moment. The catalog is a tangible memento of the collection and of this remarkable young life.”