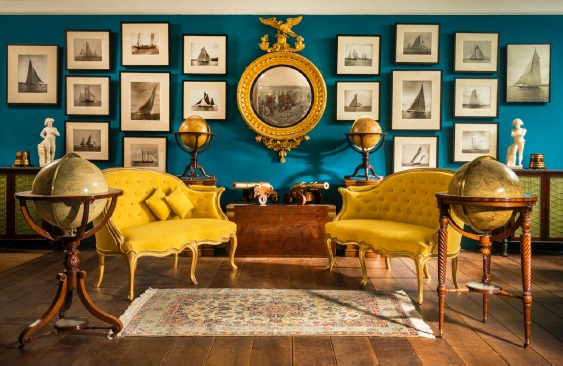 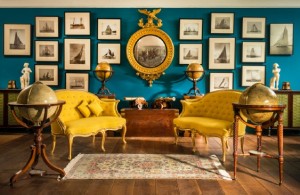 The new partnership will showcase a collection of wares, from glass tables made from ships’
telegraphs, to half hulls and exhibition quality ships’ models.
As a registered LAPADA member, Anderson Wallrock is set to become a go-to dealer for luxury maritime antiques and paraphernalia.
Stock is ever-changing but Anderson Wallrock’s founders have amassed an astonishing collection of treasures throughout their careers – from pairs of canon and rare globes, to leather deck chairs and a huge collection of original Alfred Beken photographs.
Exceptional pieces within the diverse collection include some of national importance; such as a Royal presentation clock commissioned from Aspreys by HRH Prince Edward Albert. This was presented to Jay Gould, the American owner of the Americas Cup defender ‘Vigilant’ in a 16 race series in 1894 and won by the Prince’s yacht ‘Britannia’. Secondly, a lower gun deck beam end chock once belonging to HMS Victory, which is one of the largest pieces of the ship in private hands. The chock is from the area where Nelson was taken to when mortally wounded. The collection also includes a pair of mirrors, which hung in Captain Graham E Hammond’s cabin on HMS Blanche during Nelson’s Battle of Copenhagen.
Co-founder, Tim Anderson has been selling antiques for over 25 years, alongside establishing and running the successful KB Boat Park Dry-Stack at The Camber, Old Portsmouth, only a few yards from the exciting new British Americas Cup Challenge HQ.
Charles Wallrock is the Founder and Director of Wick Antiques, which has supplied the famous Harrods Antiques Department for over two decades. In their spare time they enthusiastically campaign international Etchells 22s and Victories, as well as restoring and racing a one hundred year old gaff rigg gentleman’s yacht.
Tim and Charles have worked closely with leading designers such as Kit Kemp, Hotspur Design, Henrietta Spencer-Churchill and Tim Gosling to name but a few. Working on prestigious residential and commercial interiors, Charles and Tim both use their design skills, knowledge and experience to help interior and yacht designers realise their visions.
The Anderson Wallwrock website www.andersonwallrock.com will be launched in September 2015.