Harriet Chavasse of Thakeham Furniture explores the importance of dovetail joints in the evolution of furniture throughout the ages and offers advice on what to look for when examining items.

Dovetail joints, named due to their resemblance to the bird’s tail, were first used as far back as ancient Egyptian times where they are found on the furniture entombed with mummies. They were first used in English cabinet making in around 1650. Commonly used in woodwork joinery, they can act as a useful tool while dating our furniture.  Until the 1880s, all furniture dovetails were cut by hand using a chisel and hammer.  With the industrial revolution came the advent of the machine, and from the late 19th century onwards, dovetails were often cut by machine. These are easy to spot as they are not nearly as fine as the hand cut dovetails. 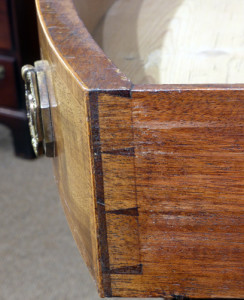 Dovetails act as a fine display of skilled craftsmanship by cabinetmakers. A thing of beauty, they are also one of the strongest joints in cabinetmaking. The ‘tail’ and ‘pins’ are cut using small precision saws and chisels. Small angled cuts were made, followed by careful cleaning down by a sharpened chisel on both sides to avoid splintering. A little glue is added to cement the connection. A well-crafted dovetail will last for centuries.

The first dovetails, as used on early walnut furniture, were fairly large and crude. As cabinet makers refined their skills the joints became smaller and neater. Look at the joints on the drawer of this Georgian dressing table for example. The ‘tails’ are so narrow at the base that they are almost imperceptible. A fine join became a signature for killed craftsman

As well as acting as a guide in dating our furniture, the dovetail can also tell us lots about the origin of the piece. Continental furniture is known for having much cruder, larger dovetails; the tails are at a much steeper angle. Simpler country furniture also often had larger dovetails, or even a single tail and pin.