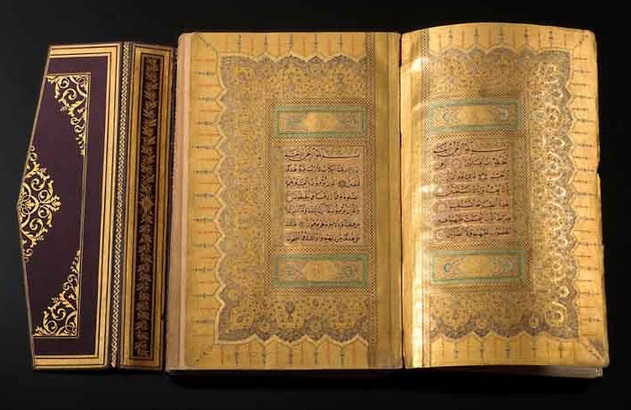 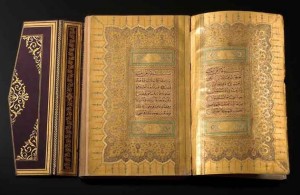 A late 19th Century Koran with a pre-estimate valuation of just £1000-£1500 eventually sold for an impressive £230,000 at the latest book sale at Bearnes Hampton & Littlewood’s Exeter salerooms.

The Koran, dated to AH 1293 (1876 AD) is bound in red gilt morocco with matching doublures. The 41-page manuscript is described as having illumination of ‘outstanding quality’, including a magnificent double frontispiece decorated in two tones of gold, light green and pale blue.  The manuscript belongs to the Court style of Ottoman manuscripts and the calligrapher named as producing the works is Yayya Hilim ‘Efendi’ (1835-1907).

Korans of this stature were made as gifts and endowments and was most probably produced in Constantinople.

The sale also saw another ‘pocket’ Koran with an illuminated manuscript in filigree box-leather backing floral covers sell for £18,000. While the identity of the calligrapher is difficult to confirm, it may be Shah Umm Salma, daughter of Fath Ali Shah Qajar, although women calligraphers are extremely rare.