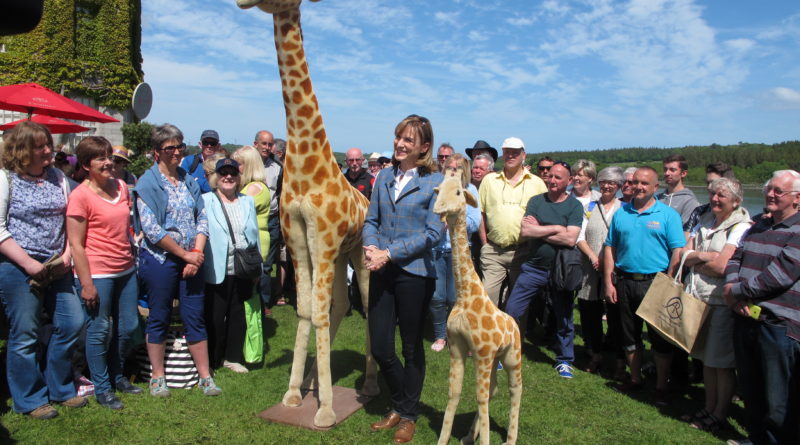 Antiques Roadshow is back on BBC One at 8.00pm this Sunday 6th September for a new series beginning with a visit to Plas Newydd on the Isle of Anglesey, on a glorious summer’s day.  Among the thousands of objects and visitors were a super-sized mother and baby set of Steiff giraffes brought by staff from the Welsh Mountain Zoo in Colwyn Bay.  They were bought by the zoo director some years ago, and were formerly on display at Kendal’s department store in Manchester. 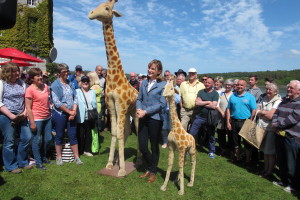 Antiques Roadshow expert Judith Miller was delighted with the rare find, and when told they didn’t yet have names, suggested “Fiona” and “Bruce”. Antiques Roadshow presenter Fiona Bruce said, “When you start in television and you become better known, even a household name, you might fondly imagine that something might even be named after you – a rose, a ship…  But Fiona and Bruce, a pair of stuffed giraffes, this is not quite how I imagined things would turn out!”

Also on the show, Fiona Bruce delves into the stirring history of the first Marquess of Anglesey, Henry Paget, who served alongside the Duke of Wellington, while the house yields a remarkable relic in the form of a spyglass that belonged to Napoleon.

A Victorian cane carved with an image of the Menai suspension bridge provides a quirky tribute to engineer Thomas Telford but specialist Hilary Kay is stunned when a huge piece of the bridge itself arrives in the shape of an old tollgate.

The team puzzle over the workings of a toilet dating from the 1840s while a pair of faded 16th century plates turn out to have been salvaged from a shipwreck in the Philippines.

Clocks specialist Richard Price is amazed by an 18th century ‘grandmother’ clock whose plain exterior hides the name of a magical maker.

There’s also the first of a regular new feature, The Imposter, in which experts challenge Fiona Bruce to spot the odd one out amongst a collection of objects. First up, four beautiful carriage clocks – but which one is a modern fake?

On the following Sunday the show pays tribute to Her Majesty the Queen, as she becomes Britain’s longest reigning monarch, with a special edition looking back at memorable moments from past series that have touched on her life.