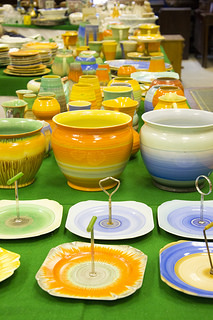 Bone china from the heyday of Staffordshire pottery Shelley made cracking prices when it went under the hammer at a Cotswolds auction recently. 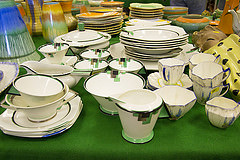 Boldly geometric in shape and design, serving platters, plates, bowls, cups, saucers and jugs from the Vogue range  were one of the highlights of the Moore Allen & Innocent auction, selling for £800 against an estimate of £200 to £300.

Their rectangular decoration was said to be reminiscent of a city skyline, while the sold triangular painted handles were unlike anything previously produced by Shelley. 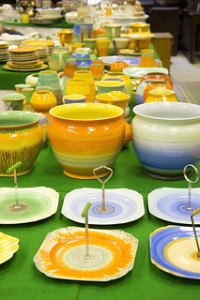 The majority of the pottery was decorated in dripware glaze – an effect discovered by accident by the company’s head designer, Eric Slater, in 1932 after mixing too much turpentine with the coloured glazes.

The brightly coloured pieces were reminiscent of the work of Jackson Pollock or Damien Hirst’s spin paintings although, of course, Shelley was doing it decades earlier.

In total, the collection sold for an impressive £2,255. The top individual lot price of the day, however, was the £900 paid for a study of a cherub upon a cloud with a red sash, in the Italian School style.

The piece – which carried an estimate of £100 to £150, had clearly been cut from a larger painting, and was bought by an Italian bidder. Whether than means someone owns an Italian old master with a corner missing and has just been reunited with the missing piece remains unclear.

Elsewhere in the sale, a rectangular gilt decorated wall mirror with moulded fruit and flowers achieved £700 against a £100 to £150 estimate, securing the third highest lot price of the day, and a pair of needlework samplers – one dated 1702, the other 1758 – made £700.