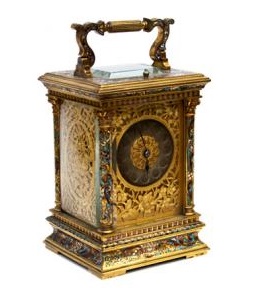 A rare cloisonné enamel carriage clock, signed EM & Co uncovered in a house in Leicestershire, is expected to create worldwide interest, according to Hansons, when it appears in the auctioneer’s Autumn Fine Art and Antiques Auction later this month.

Commenting on the clock, Charles Hanson, said, “The clock is by one of the most important makers of the late 19th century. E Maurice of Charlot 95 Paris, exhibited clocks in the Paris exhibition of 1889.” 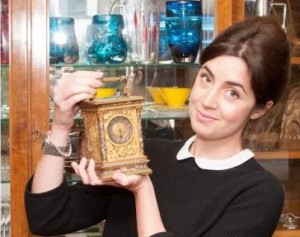 The clock, a repeater still within its red morocco leather travelling case, is a very good technical example. The aesthetic quality is remarkable. The case of champlevé enamel is beautifully decorated, before fine pierced gilt intricate work to the panels.

“The clock would almost certainly have been retailed through one of the New bond Street clocksellers of the late 19th century, and reflects the interest at the time in all things exotic, particularly Islamic and Eastern tastes in decoration,” said Charles.

Finished in gilt bronze and of high quality, the fine piece is expected to fetch between £2,000 and £3,000.