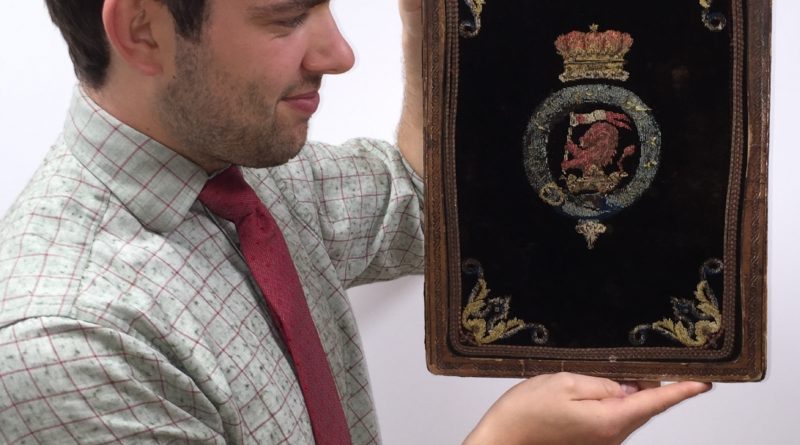 A desk blotter once belonging to the Duke of Wellington and used by him for writing important government letters will be up for auction at Duke’s of Dorchester, Dorset in October. 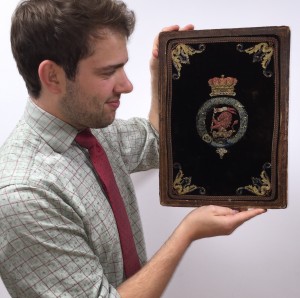 The embroidered velvet and leather lined blotter, which is slightly larger than an A4 piece of writing paper, displays the crest of the Duke and contains ink imprints from letters he has written, and even a doodle sketch of a face. One ink imprint inside the blotter preserves an envelope cover addressed “The Post Master, Buckingham Palace Gate, W10”.

There is speculation that the ink print inside the blotter was made by the Duke after writing a letter to his brother Lord Maryborough, during his position of Postmaster-General in 1834 to 1835. William Wellesley-Pole, 3rd Earl of Mornington, known as Lord Maryborough, was an Anglo-Irish politician and an elder brother of the Duke of Wellington himself.

Duke’s said the piece is in remarkable condition considering its age and regular use by the Duke, it probably dates to one of the two periods that Wellington was Prime Minister between 1828 and 1830 or 1834. Before this date, the Duke of Wellington was most recognised for his important defeat over Napoleon at the Battle of Waterloo in 1815.

This year, 2015, marks the 200th anniversary of the Battle which saw the Duke of Wellington march his troops into Waterloo, Belgium where Napoleon had placed his army. The British and French armies met for what was to be the final and most well remembered battle. Wellington conducted an overwhelming defeat on Napoleon; the victory however cost a staggering number of lives. Wellington had become known as the “Iron Duke” by his men, but even the Iron Duke wept when he reflected on the huge numbers of men killed that day. The British had suffered around 15,000 casualties and the French around 40,000.

This was Wellington’s last battle. He returned to England and started his political career again, becoming Prime Minister in 1828-1830 and again in 1834 for less than a month.

Timothy Medhurst, Auctioneer and Valuer at Duke’s in Dorchester, Dorset said “This blotter represents an important piece of British history. It is a rare opportunity to own an object used daily by one of the most well known Tory Prime Ministers and the victorious General during the Napoleonic Wars”

The blotter is expected to sell for £2000 when it goes up for auction on 15th October during Duke’s two-day auction on 15th and 16th. The auction will also include another personal artefact from one of the country’s most iconic Prime Ministers, Sir Winston Churchill. “Also highlighting the auction is a cigar butt which was once smoked by another great Prime Minister, Sir Winston Churchill. It even shows his teeth marks where he habitually chewed the ends of his cigars.”

“The Auction  will also contain 1500 lots of Coins, Medals, Militaria and Collectables. Spanning from Roman coins to Waterloo memorabilia including medals and newspapers from 1815, every part of World history is represented.”