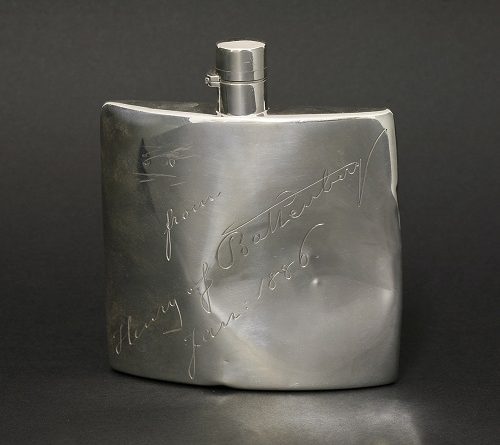 Sworders’ silver sale on November 24th brings an intriguing tale of a huntsman rewarded for saving the life of a Prince. 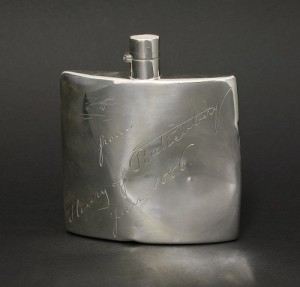 Quite what happened when Queen Victoria’s son-in-law, Prince Henry of Battenburg, went hunting in January 1886 is not clear, but the clue is in the large dent in the inscribed silver spirit flask he later presented to John Grimes Harvey Esq of the Isle of Wight Hunt as a token of gratitude.

Family tradition has it that Harvey, who was acting as gentleman huntsman in an honorary position under General Sir Henry Daly, the Master of the Hunt at that time, was instrumental in rescuing the prince after a heavy blow from a horse’s hoof, which caused the dent in the flask.

Harvey was a prominent figure in hunting circles. His family were gentlemen farmers on the Isle of Wight and in 1845 his father and other friends created the Isle of Wight Foxhounds.  Father and son both held the office of Mastership of the IoW Hunt, carrying the horn for many seasons.

John Grimes Harvey was considered a good sportsman and fine horseman and in 1888 he was offered the appointment of Royal Huntsman to Her Majesty’s Staghounds, known as the Royal Buckhounds, based at Ascot – supposedly as another grateful gesture for his rescue of the prince, who was married to the Queen’s youngest daughter, Princess Beatrice, and later became Governor of the Isle of Wight.

Harvey retired in 1897 and spent his remaining years back on the Isle of Wight. The 4¾in (12cm) long flask, which remained in his family, is stamped for Percy Edwards & Co 71 Piccadilly, weighs 4.5 ounces and is inscribed ‘From Henry of Battenburg Jan 1886’. It is estimated at £200-400.

Although perhaps the most intriguing piece from the Harvey family collection, the flask is not its leading lot. That honour goes to a Victorian silver hunting presentation comprising a Victorian silver coffee pot and cream jug, by Edward Barnard & Sons, London 1876, with a salver by the same firm but dating from a year later.

The inscription to the 19in (48cm) diameter salver reads as follows: Presented to John Grimes Harvey Esq. by the members of the hunt and other friends on his resigning the Mastership of the Isle of Wight Hounds as a recognition of his untiring zeal and energy in showing sport during his Mastership. 1878.

A Victorian silver hunting horn by William Summers, dating to London 1864 presented to Harvey’s father, tops off the family consignment. At 11in (28cm) long and weighing 5 ounces, it is inscribed: John Harvey Esq MFH, Presented at Swainston Nov 30, 1866, by members of the Isle of Wight Hunt. It carries an estimate of £200-300.

“It is a fascinating consignment in so many ways,” said Sworders’ silver consultant Anita Anderson. “As primary source documents of both hunting and royal interest, these are unique pieces of Victorian silver, which display beautiful workmanship – and the hound finial adds a charming personal touch.”