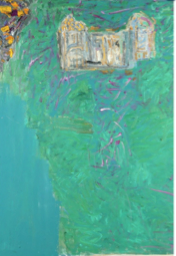 A painting by Chafic Abboud (1926-2004), one of the foremost Lebanese and Arab painters of the 20th century, made £25,200 (including a buyer’s premium of 20 percent) at Chiswick Auction’s 20th century and contemporary art and design sale.

Le Parc Montsouris, 1985, which depicts a public park in the 14th arrondissement of Paris, sold well above its low estimate of £4,000 on September 22.

Lebanon-born Abboud moved to Paris in 1947 and became part of a rising number of artists from all over the world attracted to the French capital.

Paris was the favourite destination of upcoming artists seeking the modernity embodied by Claude Monet’s last painting period and by all the Parisian masters of the 20th century.

His first personal exhibition as figurative painter took place in Beirut in 1950, whilst his first solo exhibition as abstract painter was held in Paris in 1955.