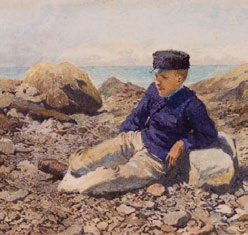 Annual art fair the Works on Paper Fair has announced that it is moving to a new venue, the Royal Geographical Society in South Kensington. The fair will be held Thursday 11 February – Sunday 14 February 2016.

The Royal Geographical Society building is in Exhibition Road, South Kensington, close to the fair’s previous venue the Science Museum. The event will use the entire ground floor of the building, including a specially built structure in the gardens. Architect Richard Norman Shaw designed the building in the ‘Queen Anne’ style in 1872 .

“We are delighted to have secured this prestigious venue for the Works on Paper Fair” says Fair Director Lucy Russell. “We have found South Kensington to be the perfect neighbourhood for the Fair, and we believe the RGS will offer a highly attractive and characterful space for exhibitors and visitors.”

The Works on Paper Fair brings together around 50 respected art dealers selling all types of art on paper, from every era. Drawings, prints, watercolours, photographs and posters are shown, from Early through to Modern and Contemporary. “A clear focus and strong identity are both strengths of this fair. Visitors know exactly what they are coming to see.” says Guy Peppiatt, Vetting Chairman.

“Although the fair focuses entirely on art on paper, the pictures on offer are remarkably diverse, due to the fact that every period is on show” says co-director Richard Hodgson. “In addition works on paper are generally considerably more affordable than works on canvas by the same artists.”

On the contemporary side, Coombe Gallery sold large botanical-based watercolours by Rosie Sanders for significant amounts, as well as five works by young artist Pippa Young.

As well as the pictures for sale, the 2016 fair will present a rare chance to see drawings by author Laurie Lee. The specially commissioned exhibition, ‘Laurie Lee (1914 – 1997) – The Artist’, will feature drawings and paintings

by the renowned poet and author of ‘Cider with Rosie’, Lee never exhibited his art, and the pictures in this show were only discovered after his death by Lee’s daughter Jessy.

In addition visitors to the fair will have the opportunity to view ‘The Enduring Eye’, an exhibition mounted by the Royal Geographical Society (with IBG), celebrating Frank Hurley’s iconic photographs of Ernest Shackleton’s Endurance expedition to the Antarctic.