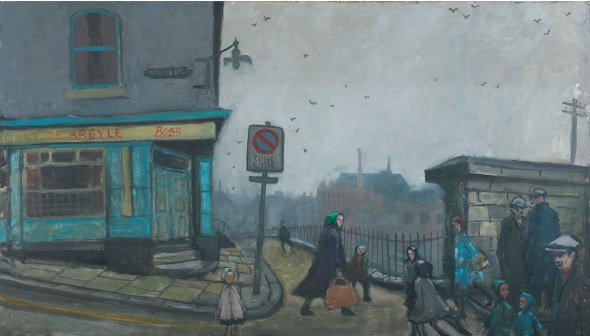 Art from the North East is undergoing a renaissance presenting real opportunities for collectors of contemporary styles, writes John Bullock-Anderson, picture expert at Newcastle auctioneer Anderson and Garland. The auction house holds major sales four times a year in addition to specialist auctions which regularly feature the work of artists mentioned in this article.

With the unveiling of Antony Gormley’s iconic Angel of the North in Gateshead in 1998, and the 2002 o1pening of the Baltic Centre for Contemporary Art on the banks of the Tyne, it is not surprising the North East is at the the heart of an artistic revival.

While the new gallery – the biggest of its kind in Europe – and Gormley’s sculpture put the region on the international map, their influence has permeated to a grassroots level evident to this day. The ‘Pitman Painter’ Norman Stansfield Cornish, who died last year, and Kenneth Rowntree – Newcastle University’s former Professor of Fine Art, now command top prices with a wealth of new talent on the horizon.

The North East’s alternative artistic tradition is one that many regions simply don’t have. With its sense of place it stands alongside the Norwich School in East Anglia and the Cornish School of Art. And it’s a tradition that goes back centuries; many of the region’s artists, sculptors, illustra tors and cartoonists can be found in Marshall Hall’s The Artists of Northumbria, which provides an encyclopaedia of the North East’s rich cultural heritage from 1625 to 1950.

Today, the alternative tradition established in the 1960s is still going strong, with developments in the last 20 years sowing the seeds for the current revival. While the explosion of Modern Art in Newcastle 50 years ago has subsided, we are seeing another renaissance. It’s an evolving trend which provides a window of opportunity for collectors to snap up some undervalued pieces.

Norman Cornish (1919-2014) is the current ‘poster’ boy of this movement. The Pitman Painter, from Spennymoor in County Durham, spent 33 years as a miner before retiring to concentrate full time on art. He died in August last year aged 94 and his pictures of North East working life are in huge demand. Cornish was a keen young artist before starting work as a miner, aged 14,on Boxing Day 1933 after his father lost his job. He soon went on to join a sketching club at the Spennymoor Settlement, an arts and recrea tional centre in the town. Known informally as the ‘Pitman’s Academy’, it produced other well-known artists such as Tom McGuinness and Robert John Heslop, and the novelist Sid Chaplin, a friend of Cornish.

At the same time further north, in Ashington in Northumberland, a similar movement was evolving known as the Ashington Group – an amateur art group founded by miners in 1934. The club started after the painter and teacher Robert Lyon (1894-1978) began giving talks on art appreciation. Soon its members, mainly miners from the Woodhorn and Ellington Collieries, grew dissatisfied with just learning about art and Lyon suggested members create their own paintings to better their understanding and appreciation of art.

The group gave rise to the pitmen painters Oliver Kilbourn (1904-1993), Jimmy Floyd (1898-1974), Harry Wilson (1898-1972) and John F. Harrison (1904-2004). Their lives were later brought to a wider audience in the play The Pitman Painters. Written by Billy Elliott laywright Lee Hall, the piece was successful both in the UK and on Broadway in the US, bringing a taste for pitheads and miners’ work to an international audience.

This summer Cornish’s Newspaper Man, dating from the 1960s, sold for £5,800. Earlier in the year a self-portrait went under the hammer for £13,500, after a second portrait by the artist was discovered on the back of the picture on the eve of the sale.

Cornish is unquestionably the north’s premier contemporary artist. He is no longer a regional phenomenon and is now sought after nationally. The University of Northumbria’s gallery in London has successfully promoted his work, helping to boost his name in the capital and beyond.

Perhaps the most significant group of independent artists from the North East was based around King’s College, now Newcastle University, in the mid-20th century. It was headed by London artist Richard Hamilton, who is often referred to as ‘the man who invented pop art’. Hamilton was part of a group at the university that included Kenneth Rowntree and Victor Pasmore – both key figures of the British art scene in the 1960s.

Yorkshire-born Rowntree studied at the Ruskin School, Oxford, then the Slade. In 1941 he moved to Great Bardfield, an Essex village that was home to a number of figurative artists, including Edward Bawden and Eric Ravillious. After WW2, Rowntree relocated north to become the Professor of Fine Art at Newcastle University – at the time one of the most progressive art schools in Britain. In the 1950s and sixties he taught and worked alongside a generation of abstract and pop artists and it was at Newcastle he became receptive to various modernist idioms, incorporating them into his own work.

There has been a recent rise in values of that group of artists’ work, especially from the 1960s and 1970s. Rowntree’s Levisham Still Life surpassed even Norman Cornish at auction in July to achieve £8,200, hammer. It was one of three Rowntree pictures on sale which together made a total of £14,000.

Recently the pitman painters’ baton has been taken up by the ‘adopted’ Geordie artist, Alexander Millar. Scottish-born Millar (b. 1960) lives and works on Tyneside, and his work shows the influence of Cornish and his contemporaries. After a number of different jobs Millar became a professional artist in 1988. For many years he developed his own style before creating images recalled from childhood memories – often featuring local Tyneside ‘gadgies’, (slang for working men). He was recently celebrated in a successful exhibition at Newcastle’s Hancock Museum.

Like Cornish, Millar’s work has the popular touch, which appeals to a wide audience, in turn resulting in greater demand from collectors.

The added attraction of these iconic images of northern men in flat caps and women in headscarves is that they adapt well o the applied art market – particularly in the form of greeting cards and calendars. The greeting cards company Washington Green, which has become a major promoter of contemporary art, has adopted a number of successful young artists whose largely accessible work is more than just ‘easel painting’ and highly sought after on the popular market. In turn collectors want the original oil painting, and this overlap has created a new trend. It’s a career trajectory that is very evident in Millar’s work.

In addition to the buzz around Newcastle University, galleries such as the Stone Gallery, the Side Gallery and the Ceolfrith Arts Centre in Sunderland continued to champion the region’s artists throughout the 1960s, seventies and eighties. And there remains a strong independent gallery scene within the region today.

Between the mid-1980s and 2009, the Newcastle Group of painters and sculptors came together to promote the work of northern artists. Its members organised exhibitions around the globe, including in Moscow during the 1996 Atlanta Olympics, and in Newcastle, New South Wales, during Australia’s bicentennial celebrations.

Many in the group, including Brian Ord (b. 1946), the sculptors Colin Rose (b.1950) and Yorkshire-born Gilbert Ward (b.1935) are still very active locally. Others include Derek Dalton (b. 1929) for some years head of painting at Newcastle Polytechnic and Kent- born Andrew Burton (b. 1961) who is the current Professor of Fine Art at Newcastle University, as well as Lizzie Rowe. All are known for their avant garde work which can be seen at the Northumbria University Gallery, the Globe Gallery in Pilgrim Street and the Newcastle Arts Centre in Westgate Road.

Because the market is still emerging – with no sign of running out of steam – there are opportunities to be had. The golden rule is to buy what you like. Almost any artist currently doing well currently is likely to continue to prosper. In buying something that you like, by an established artist, the chances are it will hold its value and likely continue to rise. With no sign of a market return to Victorian and traditional art, prices will continue to rise or at least stay firm.

Among the names to watch out for is that of Walter Holmes (b. 1936). Traditionally known as a landscape, marine and still life painter, Holmes has always been popular among more conventional collectors. But for the last decade – although he is in his seventies – he has changed to a more contemporary, impressionistic style, in keeping with the increased demand for modernistic trends.

Norman Cornish is undoubtedly the most celebrated mining artist and one of the most sought-after contemporary painters in the country. For more than 50 years his images of the miner’s working life and his observation of social activities have intrigued an appreciative audience.

He was born on 18 November 1919 in Oxford Street, Spennymoor. Spennymoor was a boom town in the latter half of the 19th century, created to supply housing for colliers and iron workers. The first mine was sunk in 1839 but neither the coalmines nor the ironworks were to survive. And by the second decade of the 20th century, when Cornish was born, the town had no major employers. Most of the menfolk worked in the collieries in nearby villages.

When he was 14 his father was unemployed and, with the ambition of a college or university education thwarted, Cornish left school and, like almost all his male contemporaries, he went to work as a coalminer in the nearby Dean and Chapter Colliery at Ferryhill.

The sketching club at Spennymoor was was one of the many activities provided by the influential ‘Spennymoor Settlement’, which was inaugurated in 1931 as a recreational centre with art and drama groups. The warden was Bill Farrell, a far-sighted social visionary, whose ethos was to influence, not just the men, women and children from Spennymoor, but also those from a far wider area. His aim was to provide a wide scope of education and interests to many – particularly the unemployed.

Cornish was accepted as a member of the Settlement at the age of 15. It was here he met fellow miner and author, Sid Chaplin. They became firm friends. At the Settlement, Cornish exhibited for the first time in the annual art exhibition, alongside fellow miner Bob Heslop, blacksmith Jack Roache, decorator Bert Dees and, later, wellknown mining artist Tom McGuinness.

RA of the North

The Settlement became known as the Pitman’s Academy, and members sent pictures to other exhibitions including The Works of Artists of Northern Counties, held annually at the Laing Art Gallery, Newcastle upon Tyne and considered by many to be the ‘the Royal Academy of the North’.

Cornish went on to exhibit nationally and locally. In 1950 he exhibited in the AlA Gallery near Leicester Square in The Coal Miners – an exhibition which featured both professional artists such as Henry Moore and amateur mining artists.

In 1966, after 33 years of underground mining, Cornish left the pits. This was partly expediency – he was suffering from a worsening back complaint. He was awarded an MBE in 2008 when he was the sole survivor of the Sennymoor Settlement. In his autobiography Cornish wrote: “The collieries have gone, together with the pit road. Many of the old streets, chapels and pubs are no more. A large number of the ordinary but fascinating people who frequented these places are gone. However, in my memory, and I hope in my drawings, they live on. I simply close my eyes and they all spring to life.”

2 thoughts on “Guide to collecting art from the North East”