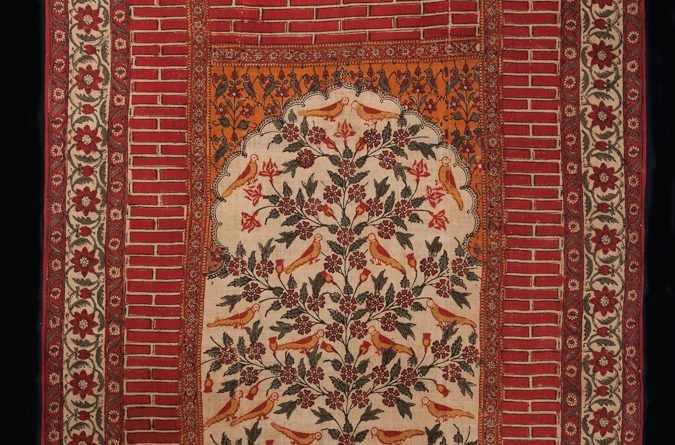 As the world celebrates the birth of the author and poet Rudyard Kipling in Bombay (Mumbai) India in 1865, a wonderful textile commissioned  by his father, Lockwood, has emerged for sale at Indar Pasricha Fine Arts in London. 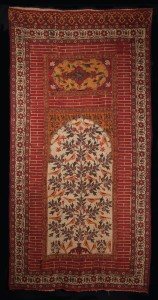 Not many people realize that many of Rudyard Kipling’s books were illustrated by his father, Lockwood who was first and foremost an artist. Lockwood also illustrated many other works, including Tales of the Punjab by Flora Annie Steel. He also worked on the decorations for the Victoria and Albert Museum in London and friezes on the Crawford Market in Bombay. He also designed the uniforms and decorations for the Imperial Assemblage at Dehli in 1877, organized by the Viceroy of Indian, Lord Lytton at which Queen Victoria was proclaimed Empress of India.

Indar Pasricha of the London gallery in Connaught St, that bears his name, says of the Kipling textile: “In this beautiful textile one can see evidence of someone who loved Indian craftsmanship and combined this with the ideas of William Morris. But its provenance, linked to Rudyard Kipling’s father Lockwood is what gives it such interest. This textile, powerfully, reminds us of the many profound cultural, historic, artistic and literary links between India and Britain. The textile is a piece of history in its own right.”

In 1870-1872 Lockwood Kipling was commissioned by the government to tour the Punjab and Kashmir to make a series of sketches of Indian craftsmen as well as sights and antiquities in these areas. In 1875 Lockwood Kipling was appointed Principal of the Mayo School of Arts in Lahore in British India and also became the curator of the Lahore Museum. Some of those sketches are in the V&A Museum, others are printed in books.  He left India to retire in England in 1893. 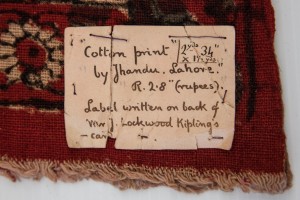 Perhaps it was during tours of the Punjab that Lockwood Kipling commissioned  this splendid printed textile made in Lahore. The textile is imposing  and combines a Mughal ethic with the brickwork of Europe. It measures130cm wide X 260cm high.

During his tenure as the Principal of the Mayo School of Art, Lahore he patronised indigenous artisans and through training and apprenticeship transformed them into craftsmen and designers. One of his protégés was Bhai Ram Sing, who assisted him in his imperial commission for decorating the Durbar Room at Osborne House. Lockwood Kipling also remained editor of the Journal of Indian Art and Industry, which carried drawings made by the students of the Mayo School. He died in 1911, and is buried in the parish of Tisbury, Wiltshire.

Lockwood’s famous son, Rudyard, was born in December 1865, and was christened Rudyard after the place of that name in Staffordshire where his parents first met. Throughout 2015 the English-speaking world is celebrating the 150th anniversary of Rudyard Kipling’s birth in the city now known as Mumbai.  Named Joseph, a family name, he was known as Ruddy by his family. Rudyard became one of the most widely read writer in the English language and was awarded the Nobel Prize for Literature. He started writing as a boy at school in England, sending poems to the local paper to earn cash for feasts with his friends.