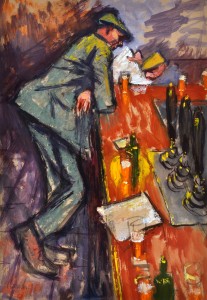 A pastel entitled Spennymoor Street Scene with Lamppost, Lady and Pram, an oil painting called Miner at Bar, and a pencil drawing of Old Ryton Village Green will be going under the hammer on day one of the three-day auction in Newcastle (December 1, 2 and 3).

The pencil drawing was gifted to the vendor by the artist and has an estimated value starting at £200. The pastel street scene and the oil of the miner, which were both exhibited at the Northumbria University Gallery, have estimated prices starting at £7,000 and £6,000 respectively.

Cornish continued painting and exhibiting almost up until his death last year. He was a prolific painter and his work is currently highly in demand among collectors.

Anderson & Garland art expert, John Anderson, said, “The pastel and the oil painting are both from the later part of his career and were both purchased in the last 20 years.

“The oil has a richer colouration, with a strong vermillion bar; it’s very warm and very visually attractive, with very, very strong painterly values. The street scene is equally attractive but more low-key; an overcast day in Spennymoor but with red in the bricks and the lady’s headscarf, so it’s still warm while conveying the overcast day. It’s very cleverly done.

“They both represent very good examples of his best work, showing working class life in his native town, where he spent his entire life faithfully and affectionately documenting the scenery that was changing around him.”

Mr Anderson said, “Norman’s work seems to be so adaptable and so universally acceptable. He is kind of a classic modernist. What’s not to like about a Norman Cornish?” 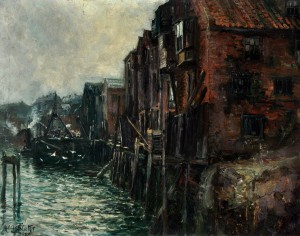 The auction will also be selling pieces by a number of other popular regional artists, including pictures by John Faulkner Slater (right), the most distinguished member of the North Shields group of artists, plus Robert Jobling, John Wilson Carmichael and Thomas Miles Richardson.

Mr Anderson said: “John Falconar Slater was massively prolific and painted every day of his life. He is a fascinating artist and had a wonderful impressionistic style influenced by Monet.

“We have two cracking John Wilson Carmichaels from an earlier period, of Old Stannington Bridge and of Lisbon Harbour with a British warship in the foreground. He is mostly known for his marine pictures.

“There is also a painting of Tynemouth Priory, from the same period, by Thomas Miles Richardson.”

In addition to artwork, the December sale brings together antiques, jewellery and collectibles from across Northern England and Southern Scotland. The auction features a number of quirky items, including a restored 19th Century horse-drawn sleigh and 1930’s talking point pieces made by luxury goods brand Asprey.