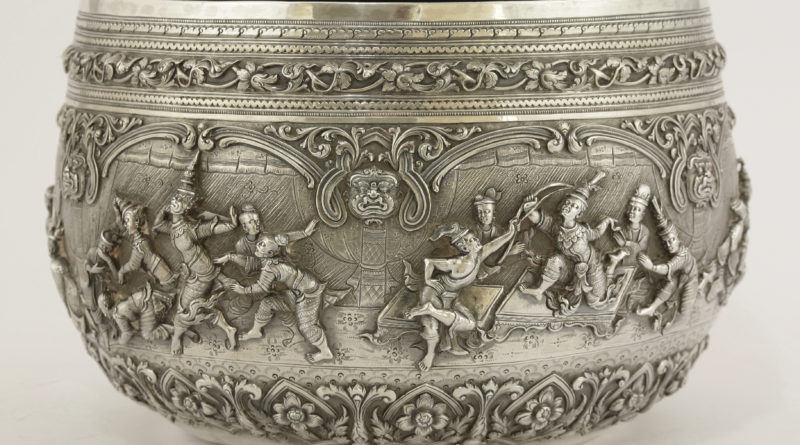 Sworders’ recent sale of silver and jewellery showed that the demand for good quality items is still very strong, the auctioneer said. Buyers online and in the room bid for many items, some of which fetched impressive prices.

The best example of the apparent growing demand came with the top lot, a circa 1930 brilliant cut art deco diamond ring, set in platinum which fetched £60,000. Other highlights at the Stansted Mountfitchet rooms included a special silver flask presented to John Grimes Harvey Esq, the rescuer of Queen Victoria’s son-in-law (Prince Henry of Battenberg). According to his family, the Prince was hit by a heavy blow by a horse’s hoof, which dented the flask. The flask fetched £200.

Anita Anderson, Silver Consultant at Sworders, said, “The success of the silver sale was as a result of the strength of good private consignments. Rare or unusual pieces of silver which have not appeared on the open market for a long time generated huge interest helping Sworders achieve strong prices for their clients.”

Catriona Smith, Jewellery Consultant at Sworders, said, “There was interest in the ring from both the trade and private clients, and although initially the bidding was between an internet buyer and a private client on the telephone, it was ultimately bought by a gentleman in the room. On the whole bidding was strong in the sale with new interest from Chinese buyers.” 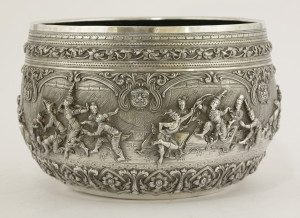 Also included in the jewellery section was a pair of cased Regency gold drop earrings with a strong provenance. Dated to around 1820, they were reputedly a gift from the Duchess of Clarence to Louisa (sic) Louise Cunningham, later Queen Adelaide, wife of William IV in 1827-1828.  These fetched £3,300.

Lasty, an early 20th century Burmese bowl (left), by Maung Yin Maung, Rangoon, dated circa 1910 went to an international buyer for £11,500. Stamped ‘MAUNG YIN MAUNG MASTER SILVER SMITH 29 GODWIN ROAD RANGOON’ to its base, the bowl is of circular form decorated in high relief with Jataka scenes with a frieze above of arching ‘clouds’ terminating in ogres’ heads typical of the work of this silversmith.