Local artists dominated the high value sales in the Anderson & Garland’s recent Fine Art and Antiques auction in Newcastle, but for once, Norman Cornish didn’t take all the glory. 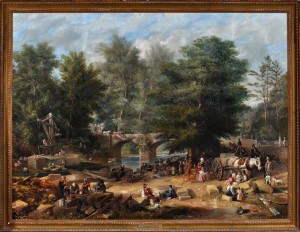 The most expensive picture to go under the hammer during the three-day sale was a piece by Tyneside-born John Wilson Carmichael. The Victorian marine artist’s Old Stannington Bridge, Northumberland, painted in 1837, sold for £15,500.

It was one of three top-priced Carmichaels in the auction. Another 1837 painting, this time of Lisbon Harbour and featuring British warships, went for £9,800 and a later piece from 1860, of a salvage operation on a shipwreck below a ruined castle, sold for £4,400.

Two of the Norman Cornish pieces in the sale were keenly contested. Spennymoor Street Scene with Lamppost, Lady and Pram sold for £13,500 and Miner at Bar went for £12,200. Both sold to local buyers.

Anderson & Garland auctioneer, John Anderson, said, “It’s quite a feat these days for an old-fashioned artist to take over the limelight from a modern artist like Cornish. But the top-priced Carmichael was a colossal size and it’s a great local view. There was a lot of competition in the room, on the internet and the telephone for the Carmichael pieces.”

There was also keen bidding for pieces by Northumberland-born natural history author and artist Thomas Bewick. His original watercolour study of Pidcock’s Lion, mounted together with the final woodcut print from 1799, and an early woodcut trial-proof with hand-colouringof Pidcock’s Tiger, mounted together with the final version of the print, sold for £5,800. A collection of his books, sold by a vendor from the same estate and including his famous A General History of Quadrupeds, sold for more than £1,000.

Mr Anderson said, “There was strong bidding and the Bewick pieces went for five times what we had expected.”

Despite the high prices achieved by the paintings, the highest-priced piece to go under the hammer across the three days was a pair of French gilt bronze figures, after originals created by Francois Christophe Armand Toussaint, which sold for £30,000. The figural torcheres are modelled on originals which were commissioned by the French Interior Ministry in the 1840s. 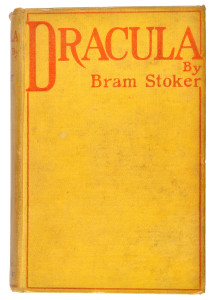 One of the big surprises of the sale was an incredibly rare first edition of Bram Stoker’s Dracula, which the specialists at Anderson & Garland identified in a box of books consigned for sale from a house clearance. It sold for £5,300 to a local collector who beat off competition from a number of national bidders to take the prize home.

“The vendors didn’t know it existed,” said Mr Anderson. “We were expecting a lot of interest; there are many versions of the first edition of Dracula but this is the earliest you can possibly get. It does not contain adverts, which the later versions do in their back pages.”

There was also a big surprise in the shape of a small Japanese vase. The Meiji Period Namikawa style vase, decorated with three panels of dragons chasing flaming pearls and geese in flight, sold for a phenomenal £6,800.

Overall, the auction attracted strong interest in the room, on the phone and online, with more than 780 registered internet bidders – nearly 100 more than in previous sales during 2015.