Discovered as part of a collection of family silver acquired over many years, an Elizabeth I silver spoon was uncovered by Matthew Lafite, Hansons’ head of silver direct from a private client. 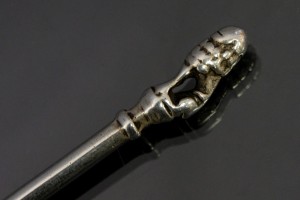 According to Mr Lafite, “This is a wonderful late sixteenth century spoon and the finial is surmounted with a cast lion sejant-affrontee – which basically means that the top of the spoon is adorned with a figure of a seated lion who is looking straight at you!

“I was amazed when this spoon was presented to me upon visiting with a client down in the south of England. It was made at a time when Bess of Hardwick was alive and 200 years before the French Revolution!” 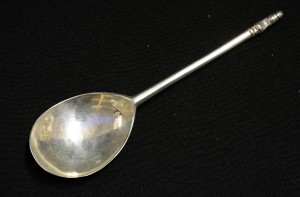 Commenting on the find, Charles Hanson said, “We are delighted our new Australian silver expert has uncovered an item of such social history.”

The spoon has a fig shaped bowl and tapering hexagonal stem with the script initials ‘I.B’ engraved to the back of the stem. Matthew comments, “These spoons were often given as christening gifts and engraved with the original owner’s initials. It is incredible to wonder who ‘I B’ was and

ask yourself, what was their life like? They were obviously fortunate enough to literally be born with a silver spoon in their mouth. To be able to afford a solid silver spoon of this quality in the time of the reign of Elizabeth I means the family would have been extremely wealthy indeed.”

The spoon is fully hallmarked and dated for London in 1589. The maker’s mark is for William Cawdell who was a specialist spoon maker. “William Cawdell’s mark is found on numerous spoons dating from this period, cementing him as a major supplier of his day. The archives of the Goldsmith’s 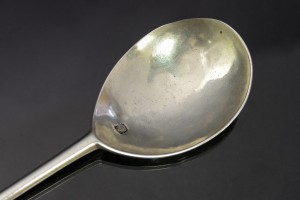 Company seem to indicate that Cawdell had a very interesting career indeed. In 1599 the London Assay Office reported Cawdell for submitting works for hallmarking which were of substandard silver, however he was still admitted to join the Livery of the Company in 1603 and even after a number of other offences, he was promoted to the rank of Warden in 1621.”

Among William Cawdell’s finest and most celebrated works is a set of twelve spoons known as the Tichborne Celebrities which were presented to Sir Robert Tichborne when Lord Mayor of London in 1657 and are currently in the collection of the Willis Museum and Sainsbury Gallery in Basingstoke. Further examples of Cawdell’s work can also be found at The Metropolitan Museum of Art in New York.

“Imagine eating your Christmas pudding with this spoon!” Matthew mused, and it is estimated at between £2000 and £3000 at Hansons Auctioneers upcoming Christmas Fine Art sale to be held on December 14th and 15th.