Alphonse Mucha was one of the most celebrated artists in fin-de-siècle Paris – from adverts to Slavic masterpieces, we consider the contribution of one of art nouveau’s leading exponents. 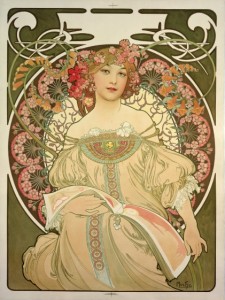 Alphonse Maria Mucha was born on 24 July 1860 in Ivančice, a small Moravian town in the then Kingdom of Bohemia, which was part of the Habsburg Empire. He was the second son of Andreas Mucha, who had six children from two marriages. His father worked as an usher at the Ivančice courthouse.

From his earliest years, Mucha’s artistic talent was evident. He could draw before he could walk – indeed his mother used to tie a pencil round his neck so that he could draw while crawling about on the floor. Very few of his early drawings survive, though an example of an early design can still be seen in the church in Ivančice, where the young Mucha carved a monogram of his initials onto a church pew.

Despite his talent, Mucha failed to gain a place to study at the Academy of Fine Arts in Prague. Instead, he took up a job as a stenographer at the Ivančice courthouse, arranged by his father. However, he proved an unruly clerk, spending much of his spare time as actor, producer, designer and scene painter for a local amateur theatre group. One morning in the autumn of 1879, Fate intervened in Mucha’s monotonous life. A newspaper advertisement by Kautsky-Brioschi-Burghardt caught his eye; the Viennese theatrical scene makers were recruiting young painters for their workshop.  Immediately Mucha responded to this advertisement, and was given his first job as an apprentice scene painter at the age of 19. 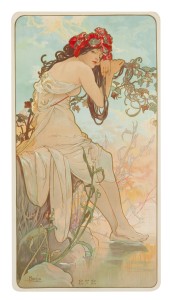 Mucha spent almost two years in Vienna. In the capital of the Austro-Hungarian Empire he attended evening art classes in his spare time and absorbed the style of Hans Makart, one of the most celebrated history painters at the time.  However, in December 1881, Vienna’s popular Ringtheatre, his employers’ greatest customer, burnt down; Mucha was made redundant. Rather than return to Ivančice, he decided to leave his future in the hands of fate. He travelled by train through Austria and into south Moravia, getting off when his money ran out at Mikulov. Luck was on his side. Portraits Mucha drew for local notables attracted the attention of Count Karl Khuen-Belasi, the landowner of a large estate nearby. Mucha was commissioned to paint murals by the count and his brother Count Egon. The count was so impressed by Mucha’s talent that he agreed to become his patron, which led to his sponsorship of Mucha’s formal training at the Academy of Arts in Munich in 1885-87. He then agreed that Mucha should continue his studies in Paris. 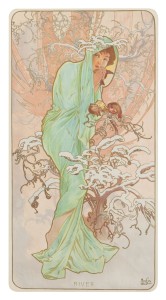 Mucha arrived in Paris in 1887. He was in the fortunate position of being supported by a wealthy patron to study in the artistic capital of the world, initially at the Académie Julian, and then at the Académie Colarossi. However, with the sudden withdrawal of the count’s support in early 1889, leaner times loomed. Mucha learnt to survive on a diet of lentils and beans and began to eke out a living by providing illustrations for a variety of magazines and books. Once started, he was soon able to establish himself as a successful and reliable illustrator.

In 1894 fate once again presented Mucha with a new and decisive opportunity. On Boxing Day he was doing a favour for a friend, correcting proofs at Lemercier’s printing works, when Sarah Bernhardt, the superstar of the Parisian stage, called Maurice de Brunhoff, the company’s director, with an immediate demand for a new poster for her production of Gismonda. All the regular Lemercier artists were on Christmas holiday, so de Brunhoff turned to Mucha in desperation. A demand from the ‘Divine Sarah’ could not be ignored.

Gismonda, the very first poster Mucha created, appeared on the hoardings of Paris on New Year’s Day 1895, and it was to revolutionise poster design. The long narrow format, the subtle pastel colours and the ‘halo’ effect around the subject’s head were to remain features of Mucha’s posters. Most importantly, these elements combined with the stillness of the near life-size figure to introduce a note of dignity and sobriety to what had been up to then garish street-art, qualities which were quite startling in their novelty. Mucha’s Gismonda was so popular that the posters became quickly sought after by collectors. Sarah Bernhardt was delighted and immediately offered Mucha a contract to produce stage and costume designs as well as posters. Also in 1896, he signed an exclusive contract with the printer Champenois to produce commercial and decorative posters.

‘Le style Mucha’ was launched. Mucha was established as the pre-eminent exponent of Parisian art nouveau. During the course of the next five years, Mucha became one of the most popular and successful Parisian artist. Commissions flooded in – for theatre posters, advertising posters, decorative panels, magazine covers, menus, postcards and calendars. Mucha’s designs for jewellery, cutlery, tableware and even fabric were in so much demand that he conceived the idea of creating a ‘handbook for craftsmen’, which would offer all the necessary patterns for creating an art nouveau lifestyle. Documents Décoratifs, which was published in Paris in 1902 by the Librairie Central des Beaux-Arts, is an encyclopaedia of his decorative work. He also spent an increasing amount of his time teaching, first at the Académie Colarossi and later at James McNeill Whistler’s Académie Carmen.

In 1899 Mucha received a commission from the Austrian Government to decorate the interior of the Pavilion of Bosnia-Herzegovina, which was to form part of the Paris International Exhibition of 1900. As part of his preparation, Mucha travelled in the Balkans to gather impressions and to sketch. Mucha took about seven months to complete the paintings for the pavilion. While working on this commission, Mucha conceived the idea for the project that was to dominate the rest of his life – to create a Slav epic, a monument to the struggles and achievements of all the Slav people. Through this monument, he aspired to unite spiritually the Slavs, who were divided under foreign rule at that time. 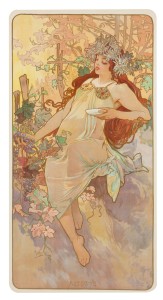 But how could he achieve this ambition? Despite his commercial successes, Mucha did not have significant savings – he was too ready to help out friends and good causes and he enjoyed collecting objects for his studio and entertaining. Mucha determined to raise funds necessary for carrying out this project and decided to go to America, seeking his fortune. It is possible that he was influenced in this decision by the example of Sarah Bernhardt who had enjoyed a number of highly successful American tours. Also, his American admirers in Paris reassured him that he would be able to earn substantial sums as a society portrait painter.

In the event, the American dream was not as easy to catch hold of as had been promised. Mucha spent the best part of six years between 1904 and 19010 in America, frustrating years nurturing a dream that could only be achieved with substantial sponsorship. But they were also happy years. In 1906 he married Marie (Maruška) Chytilová, a beautiful Czech woman 22 years his junior; their daughter, Jaroslava, was born in 1909, and their son Jiří in 1915.  And in the end his decision was vindicated when Charles Crane, an American millionaire with a love for the Slav people agreed to fund the Slav Epic. 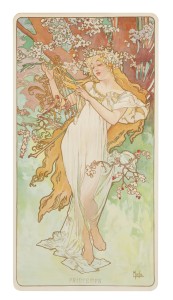 Mucha returned to Bohemia in 1910.  He spent a large part of the remainder of his life creating the 20 paintings that make up the Slav Epic. These monumental paintings, some of which measure as much as six by eight metres, celebrate more than a thousand years of Slav history, divided between specifically Czech themes and those of other Slav peoples. The canvases were completed between 1912 and 1926, and in 1928, the 10th anniversary of the independence of Czechoslovakia, Mucha and Charles Crane officially presented the Slav Epic as a gift to the City of Prague. One of the conditions of the gift was that the city should provide a suitable building for permanent display but no date was specified in the contract.

Between 1929 and 1933 the canvases were exhibited in venues in Prague, Brno and Pilzen, after which they were rolled up and put into storage. During World War II the canvases were hidden and they remained in storage for nearly 30 years. Then in 1962, through the efforts of the people of the Moravian town of Moravský Krumlov, near Mucha’s birthplace, as well as of the Mucha family, restoration work on the canvases began. The entire Slav Epic cycle was finally placed on permanent exhibition in the castle of Moravský Krumlov in 1968. It still awaits a permanent home in Prague.

Mucha died in 1939. He was among the first to be arrested by the Gestapo following the betrayal of Munich and the subsequent German invasion of Czechoslovakia.  Although he was allowed to return home after questioning, his spirit was broken and his health suffered. He died of pneumonia on 14 July 1939, 10 days short of his 79th birthday. He is buried in Vyšehrad Cemetery in Prague. 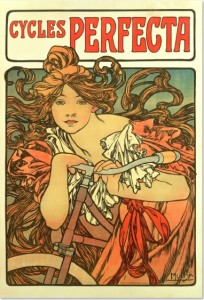 The success of Gismonda brought Mucha numerous commissions for designing advertising posters for everything from Lefèvre-Utile (biscuits) to Nestlé baby food. His ad designs featured his hallmark depiction of the stylised figure of girlishly graceful women, loosely framed in an ornamental system of flowers, foliage and symbols. The women appear listless, their expressions lost in silent reverie – apparently contemplating everything from bicycles to champagne. Nature is at the heart of the designs and, while sensuous, there is nothing of the decadence of his contemporary Gustav Klimt.

Mucha author, Ronald F. Lipp, said: “the Mucha Woman embodies in anthropomorphic form the great soul of the world and conveys… that life is good and that happiness is within our reach.”

In Mucha’s time, the concept of art went through revolutionary changes with the advent of modernism. Accordingly, the classic notion of ‘beauty’, one of the defining features of art, was challenged and expanded to embrace new ideas. Mucha believed the ultimate objective of art was the expression of beauty, which would be achieved, in his view, through harmony between internal contents (ideas, messages) and external forms.

As he wrote in his teaching notes, which were posthumously published as Lectures on Art (1975), Mucha believed that the role of the artist was to inspire people with this harmonious beauty and eventually to elevate the quality of their lives through his art. In order to achieve this goal, Mucha developed a distinctive design formula as ‘a language’ for communication, using the image of a woman – the symbol of his message of beauty – combined with flowers and other decorative motifs derived from his native Czech folk art as well as various exotic cultures.