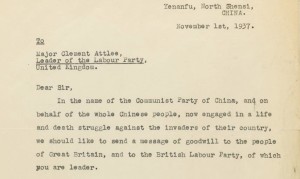 An historic letter from Mao Zedong, the Communist Party leader to British politician Clement Attlee, then head of the Labour Party, has sold at Sotheby’s for £650,000 – four times the highest pre-sale estimate.

As one of the very first communications between the Communist leader and any Western politician, the letter is dated 1st November 1937, from Yan’an, a remote part of north-western China where the Communists had set-up their headquarters following the full-scale Japanese invasion of the country. After stating Mao’s solidarity and goodwill to the British people, the letter calls for urgent practical assistance in the fight against Japanese Imperialism. 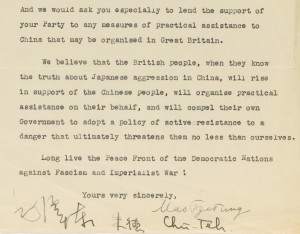 Gabriel Heaton, Sotheby’s Specialist in Books and Manuscripts: “This attempt to elicit British support
against Japan is an extraordinarily early instance of Mao engaging in international diplomacy, and is an
exceptionally rare example of Mao’s signature. This is only the second document signed by Mao to appear
on the international auction market in recent decades.”

Following bids in the Sotheby’s saleroom and on the phone, the letter was sold to a private Chinese collector.