A portrait of the Duke of Wellington, exhibited at the Royal Academy in the year of his greatest renown, is coming up for auction at Lawrences Auctioneers in Crewkerne, Somerset in January. 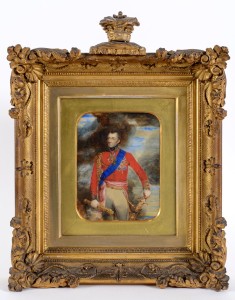 The miniature, still in its original gilt frame, measures 19 x 14.5cm.  “It depicts the Duke standing, wearing the uniform and medals of a Field Marshal, holding a baton and sword,” explains Lawrences’ specialist Anthony Kilroy who has researched the picture. “We know that the baton was presented to Wellington by the Prince Regent in 1813. The picture was executed in watercolour on ivory in 1814 by William Grimaldi, RA (1751-1830), an artist whose skills were noticed by Sir Joshua Reynolds and who recommended Grimaldi to many distinguished patrons including the Royal family.” The Prince of Wales appointed Grimaldi as his enamel painter in 1804. His exquisitely detailed works have made as much as £14,000 at auction but this subject has extra appeal as Wellington is one of the most desirable British sitters in a portrait.

“This miniature can be dated with some precision as the sword was presented at a Guildhall banquet in July 1814 and the Duke left for Brussels in August 1814 before taking up the post of Ambassador in Paris later that month,” continues Anthony. “Wellington sat four times for the portrait at Apsley House and it was exhibited at The Royal Academy in 1815 following the Duke’s celebrated victory over Napoleon at Waterloo.”

It has passed by descent in the family of Flint Stacey, a brewer and Mayor of Maidstone, whose son Edwin was also painted by Grimaldi when he was a young aide de camp in the XII Light Dragoons. Grimaldi’s portrait of young Stacey is in the same sale and was also exhibited at the Royal Academy in 1815 (estimate £1000-2000). “We hope that the combination  of subject matter, artist, condition, scarcity and provenance will attract collectors in this country and abroad,” says Anthony.

The Wellington portrait is estimated to make £5000-10000 and will be sold with silver and other objects of vertu in the firm’s Winter Fine Art sale on January 19th.