We asked 11 varied specialists for their predictions for the coming year in the world of antiques and fine art. Here’s how they see the next twelve months shaping up.

sell for £242,000; a William and Mary walnut chest of drawers with marquetry inlay climbs to £43,750 and a George III mahogany serving table, attributed to Mayhew and Ince,is knocked down for £57,500.

Reading these auction results, one may be forgiven for believing that I have been leafing through the results of an early 1990s furniture catalogue – but the opposite is true. All these auction results come from sales in the United Kingdom within the last two months. The ‘zeitgeist’ appears to be that the brown furniture market is dead but, as the results show, that is not quite true.

“First of all, trends are out. Homeowners in 2016 want a one-of-a-kind unique find that reflects their personalities.

Antiques and handmade goods will dominate the interior design scene next year allowing consumers to express their unique sense of style. Mid-century modern will be replaced by finds from the 80s will be on trend, including bold Italian designers, Ettore Sottsass and Michele De Lucchi.

Prices for some of the biggest names have gone stratospheric in Modern British Art, so collectors are turning their attention to the next phase. Keep an eye out for the likes of John Nash, Sandra Blow, Ceri Richards Eric Ravilious, Cedric Morris and Kenneth Rowntree.

Anything linked to the 1916 Easter Uprising in Dublin, especially rare letters, newspapers and other historical documents.

Trench art, notably crafted models from the First and Second World Wars rather than empty shell cases put to new uses, such as umbrella stands.

Ephemera and mementoes linked to the Apollo lunar missions, especially Apollo 11, the Armstrong, Aldrin and Collins mission, which saw the first man walking on the Moon, producing the most iconic shots of the space race. These are becoming ever more collectable as the 50th anniversary approaches in 2019.

Niche auctions. These are a useful means of promoting specific collecting areas as well as focusing the minds of both buyers and sellers. The power of the brand will continue to grow; this is very apparent in our Accessories sale, where clients want goods by leading brands such as Chanel, Louis Vuitton, Hermès, Gucci, Prada, Rolex, etc

New developments in social media. Pinterest, Periscope and others have really started to have an impact on the way people look for things to inspire them in 2015. Expect more in 2016, especially as Instagram use spreads to the older generation. It is proving particularly appealing to collectors.

Online bidding. I think that the global growth will continue as more of the live bidding platforms come on stream. I can see a time in many auctions when those in the room will be the vendors, with bidding coming via the Internet and phone.

Great expertise, great service, great delivery. The risk with so many new ways of buying and selling – and so many new players – is that expertise and professionalism gets diluted. It has never been at more of a premium and this will be even more important in 2016. Make sure people you buy from really do know what they are doing.

“The Tate Britain’s first exhibition of British Folk Art in the summer of 2014 raised the profile of this healthy but niche area of the art/antiques market, at a time when general interest and prices were already on the rise – a trend that has continued ever since. Regarding specific trends for next year, I’m delighted to say that there is a marked steer away from re-painted furniture and a growing understanding and appreciation of original surface, both in English and European works, (particularly Swedish).

“The Asian Art market has matured and evolved over the past few years, with buyers becoming ever-more discerning. The demand for rare and fantastic-quality pieces is still strong, in particular those with exemplary provenance, and such items are still making large sums.

Get the views of other experts in art and antiques for the coming year by reading the full article – subscribe to Antique Collecting in digital or in print. 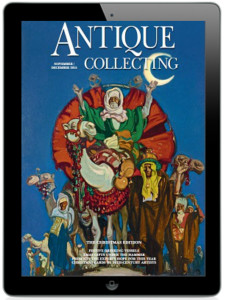 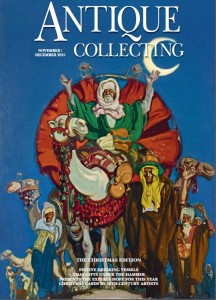