A rare auction find that could so easily have gone up in smoke was recently discovered in the chimney of a Derbyshire farmhouse – an early 19th century top hat. 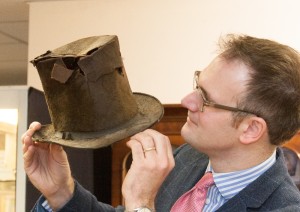 The hat is now due to be sold at Hansons Auctioneers where auctioneer Charles Hansons commented, “This is the time of year when clients have a declutter and spring clean and we as auctioneers visit them to advise on home furnishings and antiques. In an attic fireplace in a farmhouse in South Derbyshire, an unusual discovery was found, wedged in the chimney of the Georgian red brick stack was an old black top hat.”

He continued, “This type of top hat, sometimes known as a stovepipe hat or ‘topper’, is a tall flat-crowned broad-rimmed hat worn by a gentleman which would date to around 1800. It’s a very early hat since it’s covered in a felted beaver fur.” 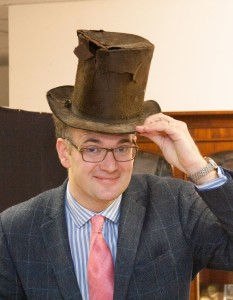 The top hat replaced the Georgian style of tricorne hat from the late 18th century. This particular hat can be identified as an early one because during the early 19th century beaver fur was slowly replaced by silk ‘hatters plush’. The hat was made during the reign of George III and would have been worn by members of the upper classes, as well as part of the uniforms of policemen and postmen to give them the appearance of authority.

“It’s a fascinating find,” said Charles, “By 1830, the top hats were extremely tall, some even reaching 20cms high, but by late Victorian era heights were reduced. From the 1920s top hats were the height of those today, about 12 to 13cms high.

Although the hat is in a tired and worn state, it is complete. “We don’t know how long the top hat was in the chimney for as it had been blocked off for many years ago, so thankfully was dry. I do hope top hats become fashionable again since they really capture an elegance from 19th century England. I often wish I had been born a dandy!”

The hat will be entered into Hanson Auctioneers’ Textiles auction on 22 February.