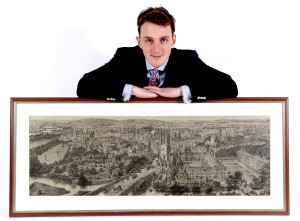 A large painting of a birds-eye view of Oxford, dating from the end of the 19th century, is one of the many pictures to go under the hammer in the Charterhouse auction on Friday 22nd January.

“It’s a charming picture of Oxford by William Brewer painted in 1893, with a view looking from Magdalen Bridge.” Commented George Holtby. “Unusually for an artist,

he went up in balloons to enable him to take a birds-eye view over his subject which was a novel way of taking a perspective. I guess today he would simply put a camera on a drone!”

William Henry Brewer was born in Oxford 1836. He worked mainly in London as a painter of churches and architectural interiors and regularly exhibited works at The Royal Academy from 1858-1897. The picture is owned by a family who had strong academic ties with Oxford, but having enjoyed the picture for many years, have decided to let someone new to hang it on their wall.

Estimated at £500-1,000 it will be sold on Friday 22nd January by Charterhouse in Sherborne, Dorset.