Featuring the swipe of a finger and paint in some places a centimeter thick, Andy Warhol’s Fourteen Small Electric Chairs will come to market publicly for the first time in 20 years on 11 February. It leads Bonhams‘ Post-War and Contemporary Art sale at Bonhams New Bond Street with an estimate of £4,000,000-6,000,000. 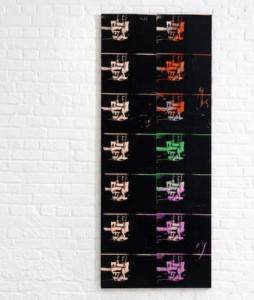 The monumental canvas, which measures more than two meters high, is drawn from two of the most celebrated series of Warhol’s entire output.

Devised in 1980 as part of the Pop Art master’s Reversals series, a post-modern reworking of his best-known compositions, Fourteen Small Electric Chairs transforms the iconography from Warhol’s 1960s Death and Disaster series. As if he was re-appropriating his own signature, Warhol reconstructed the 14 electric chair paintings he had created for his 1967 Stockholm retrospective into a new and compelling work of art.

Alongside the dollar bill, the Coca-Cola sign and Marilyn Monroe’s face, the electric chair was one of Warhol’s trademark all-American emblems. A New York invention, first used in 1890 at the state’s Auburn Prison, the contraption was devised and used exclusively in the US and became a means for Warhol to explore his interests in crime and mass culture. It is the most hard-hitting symbol in Warhol’s visual shorthand for American national identity and one of the most internationally renowned. Warhol’s electric chair paintings are in the collections at the Guggenheim in New York and the Menil Collection in Houston. 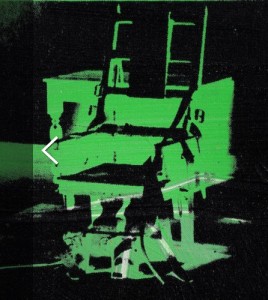 “It is incredible to stand in front of this piece,” said Ralph Taylor, Bonhams Senior Director of Post-War and Contemporary Art. “Warhol’s transformation of the electric chair motif into a striking abstract pattern encrypts the implications of the original image. The longer you look at it, the more its significance slowly dawns, gaining force from its very discretion. For me, this ironic twist is closely tied to an intense impression of Warhol’s personal self-reflection as an artist. It is so rare to come across such a historic icon of post-war and contemporary art outside museums.”

The work leads the carefully curated 11 February sale, which consists of around 50 lots, each selected to explore the different artistic definitions in the post-war and contemporary period.