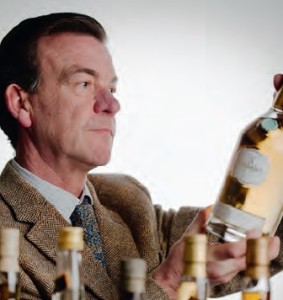 Martin Green is Bonhams’ whisky specialist, and on the eve of Burns Night he raises a glass to the current boom in collecting.

Collecting single malt whisky has probably never been more popular. I’ve been involved in this most absorbing of topics for more than 20 years and I can’t recall a time when there has been more interest, not simply in Scotland but around the world.

When I first started in the auction business, whisky was often included – almost as an afterthought – in wine sales. It was not until I launched the first whisky-only sale in 1989 that this changed. Bonhams now holds four dedicated whisky sales a year in Edinburgh, and four sales in Hong Kong. To give some indication of the growth of demand, our Hong Kong whisky sales used to be combined with wine but, in the past two years, we’ve been able to make two of them whisky only.

I’m frequently asked for advice from people about how to start collecting whisky and the first question I ask them in return is: ‘Why are you collecting?’ Because motivation will play a crucial part in your approach. People collect for all kinds of reasons: investment; status – especially in the Far East; the thrill of the chase and finally, of course, to drink. We should never underestimate the romance and emotional pull of whisky – the mystical allure of the taste of the individual malts from the various regions of Scotland.

A matter of taste

If your main goal is to collect whisky to drink, the sensible thing is to buy what you enjoy drinking already and gradually refine your palate as you become more experienced. Many people collect for this most sensible of reasons and there are many first rate guides on the market both, in book form and online, to help you find out more about the subject and guide you through the many different tastes and scents of great whisky. The Scotch Whisky Association, in particular, produces some excellent information.

For anyone collecting whisky as a hobby, it’s a good idea to start by developing a niche – whisky from a particular area perhaps, or from distilleries which have closed down. Next, buy the
best you can afford. This adds focus and interest – completing the set is a major motivation for any collector from trains to porcelain. Never be afraid to ask questions. Everyone involved in this
fascinating world is passionate about the subject and only too happy to share their knowledge and enthusiasm.

I am always careful not to offer specific investment advice. All collectors, in whatever area, know that fashions change and what looks like a sound investment one year may lose its appeal the next. But it is certainly true that some people do buy whisky as an investment and, if you are
thinking of doing that, there are some basic common sense rules to observe. Do your homework as you would with any purchase. It is a good idea to start with the main range, available at any good whisky specialists and, of course, at auction. Then progress to distillery-exclusive bottlings
which are, by their very nature, limited.

Distilleries have always had an eye for the special occasion and there are whiskies commemorating all kinds of things from the marriage of Prince Charles and Lady Diana to the 30th anniversary of the satirical magazine Private Eye. In 2011, I had the great privilege of selling a rare bottle of 55-year old Glenfiddich celebrating the 110th birthday of Janet Sheed Roberts, the granddaughter of William Grant – founder of the Glenfiddich distillery – and at that time the oldest person in Scotland. The bottle sold for a then world record price of £46,850 and the proceeds, appropriately for the water of life, went to support the charity, Water Aid. There will only ever be 11 bottles of this whisky available and it would be very surprising if their value did not increase with the passing years.

As with anything bought specifically as an investment, it is sensible for the investor to keep a close eye on the performance of the portfolio. There are now many magazines and blogs devoted to whisky and whisky collecting which offer statistics and advice. Whisky auctions provide another source of information. By studying the movement of prices over a period, and talking to specialists, collectors can gain some idea of how their portfolio may perform if brought to market.

A bottle of Glenfiddich 50 year old bottled in 1991 (the age refers to the number of years the product has spent in the barrel before bottling) sold at Bonhams’ October whisky sale in Edinburgh last year for £13,750. The last bottle to appear at auction, in 2003, had made £3,700. There is a useful comparison to be made here with the retail market. In 2009 Grants issued another release of 50-year Glenfiddich. This had been bottled in 2008 in an edition of 500 and the distillery is releasing 50 bottles a year for 10 years. The 2009 release was priced at £10,000; for this current year’s release the price is £22,500.

It’s worth restating that auction houses are usually careful to stick to the facts and not make specific investment recommendations – that has to be for the judgement of the collector. Having said that value and potential value in whisky do not need to be shrouded in mystery. As with most products, reputation, scarcity and exclusivity are key determinants of what will be desirable to collectors, tempered of course by changes in taste and circumstance. Some of the growth of whisky at auction in recent years has been driven by the rapid expansion of the middle classes in China. As could be expected that market is now starting to mature and buyers are becoming more discriminating in their taste. This will feed through to demand and, of course, to prices.

One relatively recent development is the growth of interest in Japanese whisky and this is certainly helping to drive the market in fine single malts, especially in the Far East. This has become so sought after that Bonhams’ whisky sales in Hong Kong are now heavily populated by Japanese whisky alongside its older Scottish counterpart. Our sale in August last year featured bottles from Japanese distilleries which had closed and produced some astonishing bidding and
prices. Hanyu Ichiro’s Full Cards Series (54 bottles) sold for a world record price of HK$3.8 million (£325,000) and a bottle of Karuizawa-1960-52 year old, The Cockerel became the single most expensive bottle of Japanese whisky ever sold at auction when it was bought for HK$918,750 (£77,000).

Scotland will I think always be the spiritual home of whisky but, even as a proud Scot, it would be churlish of me not to acknowledge that there are splendid whiskies made in many countries round the world – including Japan, Ireland, Canada and America.

I am sometimes asked why prices at auctions in Hong Kong can be higher than for identical bottles sold in Edinburgh. The reason for this is simple, but important for potential investors to bear in mind. Bottles sold in Hong Kong are subject to 100 percent duty calculated on the value when imported into the country and, because sellers will be looking to recover this, it is factored into the reserves and reflected in the sale price.

Equally people from Hong Kong buying at our Edinburgh auctions will face the same issue when they import their purchases.

Once you have bought your whisky you will want to keep it in the best possible condition. The good news is that unlike fine wines, which can require specialised and temperature controlled
environments, whisky is relatively easy to care for as long as you follow some basic rules. It should always be stored out of direct heat or sunlight, so as not to undergo evaporation, and corked bottles should be stored upright, avoiding contact between the cork and the spirit inside. It’s worth adding that whisky investors often keep it in storage for convenience. This will always attract a charge which needs to be taken into account.

I should say a word about forgeries. Fortunately these are rare but as with anything it pays to keep your wits about you. If you are in any doubt, the distilleries will usually be very willing to help, as indeed will the auction houses. Forgeries damage everybody except the forger so it is in all our interests to combat this kind of fraud whenever it arises. One final thought. Collecting whisky can quickly turn into a passion. It’s an absorbing and beguiling subject with a great
history which has fascinated people for centuries. And, best of all perhaps, if all else fails you can always uncork a bottle, pour a dram and toast a brighter tomorrow.

One thought on “How to collect single malt whisky”