Ancient Chinese antiquities will be a major attraction at The Cotswolds Decorative Antiques & Fine Art Fair at Westonbirt School, near Tetbury, Gloucestershire from 25th – 27th March 2016.

Dating from the Tang, Han and Ming dynasties, a variety figures will be on sale from specialist dealer Paul Burnett. Antiquities – antiques more than 500 years old – appeal both to collectors and interior decorators. They offer historic interest, charm and rarity, making such items very appealing to anyone looking for something different for their homes and personal collections. Paul Burnett will be showing a rare earthenware model of a figure together with a number of painted pottery figures of court officials and servants, figures that carried out the tasks required of the deceased in the underworld. These figures were buried with their wealthy aristocrat to provide service in the afterlife. Sometimes they represented real people who were killed and buried in the tomb of their master.

They are priced from £125 each. Collectors of Chinese ancient artifacts owe everything to Chinese beliefs about the afterlife.

‘The Cotswolds Decorative Antiques & Fine Art Fair offers a wide variety of pieces for collectors, home furnishers, interior designers and anyone looking for unusual decorative accessories. With more tha forty-five exhibitors, it offers exhibits from £20 to more than £10,000 in price.

Among the many regular exhibitors will be Brian Ashbee & Wesley Wotruba with 19th and 20th century furniture and objets d’art; Scandinavia by Design specialising in Mid-Century Modern furniture and lighting; Simply Decorus with Art Deco and 20th century decorative arts; and The Antiques Bazaar with Arts & Crafts silver and English Art Deco pieces. 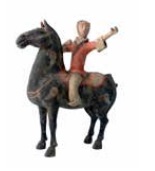 Other specialists include jewellery dealers Plaza, Terry Robert, Trivette and Shapiro & Co, while Candice Horley shows a range of designer costume jewellery from the 1930s and 40s. English and Euopean silver will be represented by Elizabeth Nicolson,

Also specialising will be Roger de Ville with early English pottery, and Hassan Alabaf with Persian rugs and carpets.

One exhibitor will be showing for the first time. Zuleika Gallery from Oxford will be specialising in Modern British paintings and works on paper, including works by David Hockney; Julian Trevelyan, Bridget Riley, Dame Elizabeth Frink, John Piper and Patrick Caulfield.