Leading international dealers in the field of important European sculpture, Tomasso Brothers Fine Art will unveil a rare work by the Florentine master of the late Baroque era, Massimiliano Soldani-Benzi (1656-1740) at TEFAF Maastricht from 11-20th March. 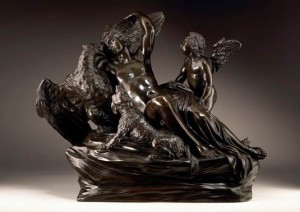 Ganymede and the Eagle, circa 1714, depicts a poetic moment from classical mythology when Zeus, disguised as an eagle, captures Ganymede, in Homer’s words “the loveliest born of the race of mortals”, to become his cup-bearer.  This dramatic composition is a wonderful example of Soldani-Benzi’s suave modelling of form, and the sumptuous finish of his bronzes. It is also an extremely rare model: the only other known version is held by the Fitzwilliam Museum, Cambridge.

Soldani-Benzi is acknowledged as the finest bronze caster in late 17th and early 18th century Europe, and along with Foggini, is considered the most significant proponent of the Florentine late Baroque style in sculpture.  He excelled in medal and coin-making, enjoying commissions from Pope Innocent XI and Queen Christina of Sweden, and in 1682 he became Director of the Grand-Ducal Mint.  His workshop, situated on the ground floor of the Galleria degli Uffizi, was patronised by the Medici Grand Dukes, the Elector Palatine and the 1st Duke of Marlborough, amongst many prestigious foreign clients.

The present model is first mentioned in correspondence between Soldani-Benzi and his London agent Zamboni, dated 15th October 1716, regarding four casts Lord Burlington had ordered two years previously but not yet paid for.  They included a ‘Venus and Adonis’, of which there is an example in the J. Paul Getty Museum, California, and a matching pair of groups depicting ‘Leda and the Swan’ and ’Ganymede and the Eagle’.  It is known that a ‘Ganymede and the Eagle’ was sent to England, although ‘Leda and the Swan’ is now missing.

The present bronze was previously at Swithland Hall, Leicestershire, residence of the Earls of Lanesborough. The piece will be offered for sale priced in excess of €1,000,000 (euros).