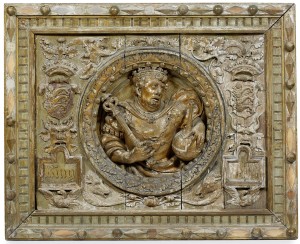 Dating from the Tudor court, the oak panel is thought to have been designed by Hans Holbein the Younger, the Swiss-German artist famous for his iconic portraits of Henry VIII.

Believed to depict King John, the panel bears a striking similarity to both a panel in the Victoria and Albert Museum and one in the Museum of London. Each features a regal central figure surrounded by the same foliated scrolls and decoration. It seems, centuries ago, they were once part of a single series of interior decoration.

It is therefore likely that this panel shares the same remarkable provenance as the panel in the Museum of London, which reputedly comes from the London home of William Paulet, a civil servant whose career spanned the reigns of Henry VIII, Edward VI, Mary I and Elizabeth I and who ended his career as Lord High Treasurer of England in 1548.

David Houlston, Bonhams Senior Specialist in Oak Furniture, said, “This was a remarkable piece of craftsmanship with links to some of the most momentous periods in English history.  I am not surprised it was in such high demand nor that it sold for such an impressive price.”