The Modern British & Irish Art sale at Christie’s South Kensington on 17th March will include two early paintings by Irish artist Tony O’Malley which, when turned over and joined together, reveal a ‘lost’ unfinished nude by Francis Bacon. 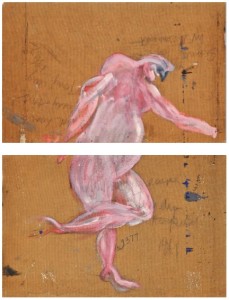 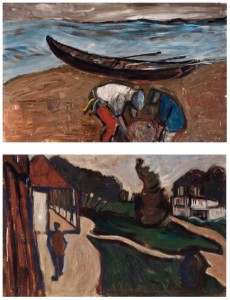 Bacon started Figure when working in St Ives, Cornwall in the late 1950s, but when the artist cut short his visit following an argument with this partner he abandoned the work, among many others. The work was divided into two by O’Malley who went on to paint two scenes on the opposite sides: Currach, Clare Island and Evening Landscape Tehidy Hospital.

For years these works were separated, residing in the collections of two different owners. Now these paintings, and the lost Bacon study, will be reunited and viewed together for the first time in almost 60 years, when the public pre-sale viewing opens on 12th March at Christie’s South Kensington. They will be offered in the Modern British & Irish Art auction on 17th March with an estimate of £20,000-30,000.

In September 1959, Bacon travelled to St Ives to work on a series of paintings for his exhibition at the Marlborough Gallery in March 1960. Bacon’s stay in St Ives occurred during a significant stage of transition in the artist’s career, where he experimented with colour and technique, readdressing how he located the figure in space.

Whilst working in St Ives, Bacon rented 3 Porthmeor Studios, from the sculptor William Redgrave and his wife Mary, known as ‘Boots’, in a row of studios previously occupied by tenants including Ben Nicholson and Terry Frost. Intending to stay for six months, Bacon’s visit was cut short after a turbulent argument with his then partner Ronnie Belton.

When clearing the studio Boots gave away many of Bacon’s discarded works to friends who would re-use the materials. It has been reported that O’Malley was approached by a dealer who propositioned him to ‘complete’ the Bacon, which he refused to do and split the board in two, while others recount that the board was cut to suit O’Malley’s preference for working on smaller sized boards.

The two halves of Bacon’s Figure were first displayed together when an image of the joined paintings was shown at Tate St Ives’s 2007 exhibition Francis Bacon in St Ives. This March will be the first time that the two paintings are displayed together in public. Figure will be included in the forthcoming catalogue raisonné of Francis Bacon, to be published in April 2016.