Sworders auctioneers of Stansted Mountfichet in Essex will offer a rare head and shoulders bronze of Sir Winston Churchill at their The Modern British Art Sale on April 12th. 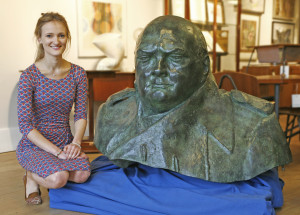 It is one of only six casts taken from the famous statue of the man voted the Greatest Briton ever to have lived that stands in Parliament Square, having been put up in 1973.

The original 12ft high bronze was created by Ivor Roberts-Jones RA (1913-96), while the plaster cast taken to create the limited edition of six bronze busts was supervised by Nigel Boonham, Past President of the Society of Portrait Sculptors, on behalf of the Trustees of the Ivor Roberts-Jones estate.

Roberts-Jones was a founder member of the Society of Portrait Sculptors in 1953 and was head of the sculpture department at Goldsmith’s College of Art from 1964-1978. He established his reputation for portrait sculpture including commissions for Yehudi Menuhin and George Thomas, Viscount Tonypandy, as well as over-lifesize figures including Field Marshall Viscount slim of Burma and Field Marshall Viscount Alanbrooke both of which stand in Whitehall.

In 1971 he was commissioned to produce the full-length statue of Winston Churchill which now stands in Parliament Square, London, which is, without doubt, his most famous work. He later indicated that the pose of the statue had been largely inspired by the famous photograph of a grim-faced and sorrowful Churchill inspecting the smouldering bomb wreckage of the chamber of his beloved House of Commons on the morning of 11th May 1941.

In 1995 Ivor Roberts-Jones was commissioned by the Czech government to make another cast of the Churchill figure to stand in the recently renamed Winston Churchill Square in Prague. Ivor replied that his original mould for his figure in Parliament Square had disintegrated, and he doubted very much whether Parliament would allow him to make a cast from the statue himself.

He did produce a clay maquette for a new Churchill head, but died a couple of months after sending it to the Meridian foundry. After further negotiation, his widow, Monica Roberts-Jones gave her permission for a copy to be made of the statue in Parliament Square, somewhat swayed by the fact that this proposal had the support of Lady Thatcher and the Czech President Vaclav Havel.

With the British Foreign Office and the Royal Parks Agency also giving their project their blessing, permission was given and an up-coming portrait sculptor, Nigel Boonham was given the task of supervising the making of a cast from the Churchill statue in Parliament Square. It is from the plaster cast of the head and shoulders made at this time, that this bronze was cast.