Chiswick Auctions held a successful 20th Century Contemporary Art and Design sale at the start of the month with a number of key pieces from the era showing continued demand.

In the furniture section of the auction, standout Lots included a 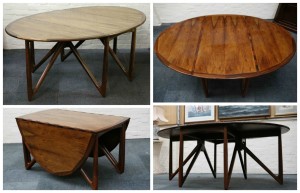 , Denmark. From the 1960s, the piece by Kurt Ostervig for Jason Moblerm, Denmark, features an elliptical gate leg form, a castellated hinge and sculptural hairpin legs. The piece achieved £3,360, including buyer’s premium. 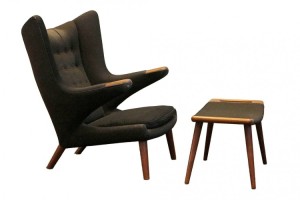 A Hans Wegner armchair and stool by the Danish designer for AP Stolen secured an even more impressive £6,000, including buyer’s premium. The 1950’s model AP19 ‘Papa Bear’ armchair and footstool is made from teak wood with black fabric upholstery.

An Arts & Crafts piece from Liberty & Co also broke through the +£1000-mark, with the buyer of a copper clad, oak book trough paying £1,080 for the item. The front of the box features a deep repousse decoration, attributed to Newlyn School, and depicts a stylised sailing ship, along with conch shells on each side. The item bears a label with Liberty & co. underneath. 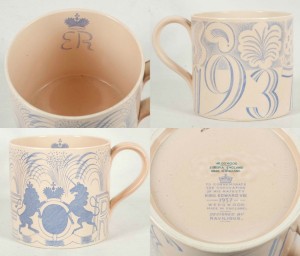 A single Wedgwood earthernware mug, produced to commemorate the coronation of King Edward VIII in 1937 and designed by Eric Ravilious sold for £780, including buyer’s premium. The mug is in light pink tones and decorated with light blue images and has an inscription on the base relating to the occasion, maker and designer. 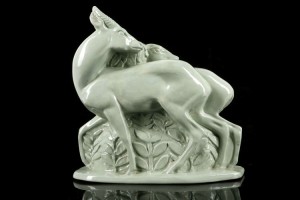 Elsewhere, a decorative object also by Wedgewood and from a decade earlier proved to be another popular item. Designed by John Skeaping for Wedgwood & Sons in circa 1927, the period prototype trial pottery group, which never went into production, is modeled in relief as a pair of gazelles. Produced in sage green lustre glaze, the piece is impressed with the Wedgwood mark underneath.