A portrait of a gentleman from a famous political dynasty is expected to attract Anglo-American interest when it goes up for auction in Shropshire next week at Halls. 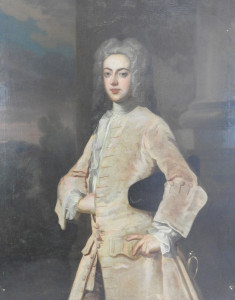 The oil on canvas portrait, attributed to Joseph Highmore (1692-1780), is believed to be either Lancelot Lee (1719-‘59) or Thomas Lee (1690-1750), a member of the aristocratic Virginian family that also produced Robert E. Lee, Confederate General in the American Civil War.

Valued at up to £5,000, the portrait will be going under the hammer at fine art auctioneers Halls’ pictures, silver and jewellery auction in Shrewsbury on March 16th. The picture original hung at Coton Hall, Alveley, Shropshire, the ancestral home of the Lee family. The property passed out of the Lee family in 1821 but the portrait remained in the drawing room there until at Coton Hall was sold in 2003.

Despite extensive research in the UK and with the Lee family in Virginia, Halls’ picture specialist James Forster has been unable to determine for certain the identity of the gentlemen in the painting. However, he has deduced that it’s ether Lancelot Lee of Coton Hall, the eldest son of Sir Eldred Lancelot Lee and his wife Isabella (1690-1767) or Thomas Lee, president of the Colony of Virginia and builder of Stratford Hall, Virginia, in the 1730s.

“The Lee family were great patrons and friends of Joseph Highmore who painted them many times, including the ambitious group portrait which hung in the drawing room at Coton Hall and now resides in the Wolverhampton Museum,” said Mr Forster. “Lancelot Lee is the most prominent figure in the painting and is being presented by his sister Dorothy as heir to the estate.

“Thomas Lee’s son Richard was one of the signatories on the Declaration of Independence and the Confederate General Robert E. Lee was a direct descendent. Thomas’ grandfather, Colonel Richard Lee, founded the Lee family in Virginia when he emigrated from Shropshire in 1639. As distant cousins, Lancelot and Thomas Lee corresponded to each other at least once and there is a recorded letter from Lancelot dated May 21, 1745.

“It is believed that Thomas travelled to England twice around 1715 and it is possible that he could have met and sat for Joseph Highmore on one of those trips. Highmore was a very significant artist and painted many of the prominent people across Europe at that time. It’s a very interesting picture with a fascinating back story, which has captured the attention of the Lee family in Virginia.”

The portrait is illustrated on page 114 of the book The King’s Ley by G. Howard Thompson and is titled the Hon Thomas Lee. A copy of the book is for sale with the portrait. 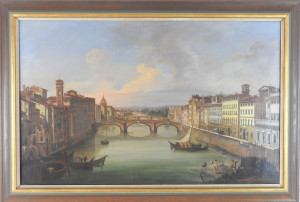 Other notable entries in the auction from a private vendor are two 19th century views of Florence, Italy. A work titled The Arno from the Ponte Vecchio by Giovanni Signorini (1808-‘64) is valued in excess of £8,000 while The Piazza  Santa Maria Novella by Antonietta Brandeis (1849-1910) is expected to fetch around £6,000.

“Both pictures provide a wonderful snapshot of Florence in the late 19th century,” said Mr Forster. “Signorini painted the famous view more than once, but one of the bridges is no longer there, as it was destroyed by the Germans in Second World War.”

Works by two famous illustrators are also expected to sell well. French artist Louis Icart (1888-1950) was a pilot in the Great War and continued to sketch, often managing to inject an element of humour into his works. He has three etchings in the auction valued at between £250 and £800.

Another illustrator and cartoonist featured is American Peter Arno (1904-‘68), whose work Q37 is typical of his style and at £600-800 offers a buyer a good opportunity to acquire one of his larger works.