Tennants Auctioneers is selling a large carved oak overmantel which has previously been referenced in Anthony Wells-Cole’s book Art and Decoration in Elizabethan and Jacobean England, as ‘whereabouts officially unknown’.

The panel will be going under the hammer on Saturday 9th April, as part of the two day, Spring Fine Art Sale.  The overmantel’s pre-sale estimate is £8,000-10,000.

The panel once hung in Hunwick Hall in County Durham, but was inherited by the Yorke family circa 1900, when Hunwick was demolished. There was no record kept of who had inherited the panel, or whether it had been demolished with the property, hence ‘whereabouts officially unknown’ in Wells-Cole’s book. 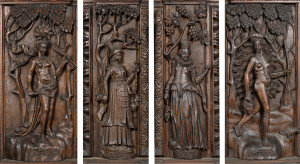 It is attributed to a Newcastle Workshop of Dutch Carvers, circa 1630, with a moulded cornice and vine-carved frieze. A central panel of Royal Arms is flanked by panels on each side depicting Orpheus and Orion, all between stiles with standing figures personifying the four parts of the world, each carved and named Africa, Asia, Evropa and America. The panel is 17th century and later, and measures 372cm by 124cm.

The two carved panels of Orpheus and Orion are similar to a set of prints designed and engraved in Cologne and dated 1602.  This exact overmantel is referenced and illustrated in Anthony Wells-Cole’s book. Photographed in situ at Hunwick Hall in County Durham and listed as “whereabouts unknown”, the overmantel was inherited by the Yorke family c.1900, and thus by descent.  The overmantel is similar to a carving formerly at Clervaux Castle, Croft-on-Tees, North Riding of Yorkshire.