Some fine collections of Lusterware, including a number of lots with a North East connection, are among the fine ceramics included in the Anderson & Garland March Fine Arts sale in Newcastle today until Thursday.

Of particular interest to North East collectors will be the Sunderland luster, creamware and pearlware featuring views of the city’s first iron bridge. Lusterware is created with a metallic glaze to give the item an iridescent sheen and is highly collectible.

Covering more than 30 lots, the pieces were collected by a vendor who lives in the Scottish Borders, who prefers to remain anonymous.

He said, “The collection was started in the early 1980s and hasn’t been added to since the mid-90s. It was formed with the idea of getting every single view of the famous bridge and it’s more or less complete from that point of view. The different views enable you to ascertain which pottery made the piece by referring to the relevant booklets published on the subject.”

Fans of Lusterware will also be interested in a large Danish commissioned cache pot, inscribed T Johnsen, og, MaenJohnsen, which dates from the early 19th Century. The pot has an estimated value of  £40-£60. Other Danish interest items include a fantastic rare collection of Royal Copenhagen figures of children in Dutch national dress.

Consigned by Mr Farrell, from Stanley, he said, “My aunt has downsized but she was a big collector. Her hobby was to travel around the UK, buying all sorts of things from paperweights to china. She enjoyed visiting the potteries. The figurines were her pride and joy.”

He is also entering on her behalf three rare Faberge Easter egg pendants, “She bought the eggs from Northern Goldsmiths as an investment and as something she liked.”

Anderson & Garland auctioneer Fred Wyrley-Birch is expecting a lot of interest in both the lusterware collections and the Danish figurines. “The figurines are extremely rare and desirable figures, featuring children and young adults in 19th Century Dutch dress. They are hand painted and very pretty. 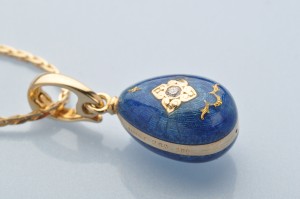 “It’s also wonderful to have the Faberge eggs, especially at Easter time. Faberge originally created eggs for the Imperial Royal family of Russia in the 1880s; these are later examples circa-1980s, which are inspired by the great Russian jeweller. We estimate their value to be between a couple of hundred pounds to £800 each.”

The Anderson & Garland Fine Art sale will be held in Newcastle from March 22-24, and includes a huge variety of art, jewellery, curios and collectibles.