Antiques for Everyone in April will showcase the delicate and beguiling character of lace at the NEC, when a special exhibition is presented by Stourbridge-based Lace Guild Museum, focusing on lace from the 18th to the 21st century.

Lacemaking was an essential source of income for many home workers both in this country and abroad. It is a fascinating tale of human skill and artistry which finally succumbed to mechanisation in the industrial age. Honorary Curator, Gwynedd Roberts, will present a unique insight on the Museum Collection and the items in the exhibition.

The latest TV period drama Doctor Thorne, the adaptation of Anthony Trollope’s novel by Julian Fellowes set in the nineteenth century provides a prime opportunity to see how lace was used to create frills, ruffles and bows on ladies’ bonnets and dresses

Colleen Kelsall who was responsible for the costume design on Doctor Thorne said, “I tried to use antique lace whenever possible. I tend to use less expensive reproduction lace for the supporting artists when the camera doesn’t tend to get as close. It’s lovely to see that lace making is making a comeback.”

Fashion changes very quickly. By the time this adaptation was set men’s clothes had become plainer whilst only a few years earlier men would been seen wearing lace for neck ties and cravats as seen in in the picture of the foppish gentleman in the powdered wig. 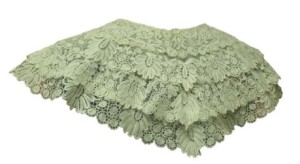 Antiques for Everyone Fair Show Director Mary Claire Boyd said: “We are delighted to be staging this unique display of lace courtesy of The Lace Guild at the spring fair. The Guild is bringing examples of its wonderful museum collection of lace to the NEC. We are thrilled to have such a wealth of knowledge on hand to support and advise visitors about the craft of lacemaking, its history and use.”

As a luxury item, lace became an indicator of wealth and standing, adorning the garments of the rich and famous. It was so valuable that pieces of lace were forever being recycled and reapplied to different garments, hence the Lace Guild owns many separate pieces of lace in its collection which will be on display at the NEC in its first public display.

To many lace historians the 18th century is considered to be the “golden age” of lacemaking. This is when quality of design, skills of technique and interpretation of the design with the development of grounds and fillings, reached new heights. For around three quarters of a century lace was an essential part of fashionable dress. 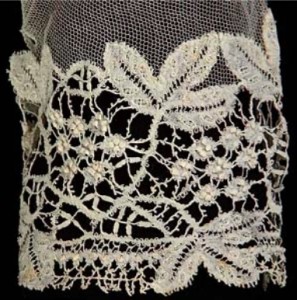 As the fashion changed, new fabric designs were created and accessories, in particular lace, had to evolve to match. The main handmade Bobbin lace areas in Britain were in Devon around Honiton, (which specialised in Part Laces), and in the East Midlands counties of Buckinghamshire, Bedfordshire and Northamptonshire where straight laces were made, and around Honiton in Devon which specialised in part laces. There were other smaller centres but these were usually only commercially viable when lace was very fashionable and sold well. Nottingham lace was primarily all about machine produced lace which often imitated the styles of handmade lace.

Lace has its own language relating to styles and designs, which then became synonymous with the places where it was produced, names like Honiton, Bucks Point, Bedfordshire, Torchon. Lace and Folk Art The distinctive English East Midlands beaded and decorated bobbins made from locally sourced wood or bone are rightly recognised as a unique Folk Art, as are those of very different design originating from Devon. The display will also feature bobbins, and various other lace-making tools. Voluntary staff from the museum will be on hand to speak about lace and its history.