One family’s collection, giving a remarkable insight into starkly contrasting aspects of Georgian life, was brought to Hansons Auctioneers recently. The archive includes two scrapbooks, a hand-written journal dating from 1806 and an array of artefacts from some of the most exotic locations accessible at the time. 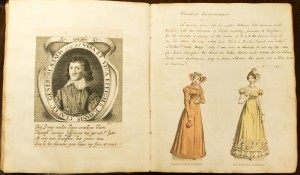 The gentle, sophisticated life of a wealthy lady of the early 19th century reflected by the two scrapbooks compiled by Miss Sayer, ancestor of the current owner. One volume includes a variety a prints and engravings whist the other is a typical example of a young lady’s album of this Jane Austen period. A hand-written poem opens the delights as its author expresses appreciation at being allowed to write the first page: ‘Forgive me if something like pride should be mine Thus to write my name first in this Album of thine.’

Transcripts of ‘mad, bad and dangerous’ Lord Byron’s poetry, engravings of contemporary fashions, snippets of advice and anecdotes complete this book. One especially endearing contribution tells of a most discrete way of conveying regard for a lady: ‘When a gentleman presents a fair flower or trinket to a lady with his left hand this on his part is an overture of regard, should she accept it with her left it is considered as an acceptance of his esteem, but if with the right it is a refusal of the offer.’ 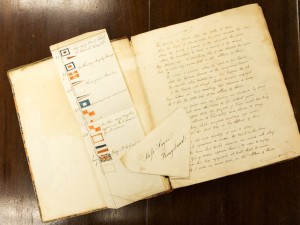 In complete contrast to this genteel existence another member of the family, thought to be Miss Sayer’s brother Robert, was facing adventure and danger travelling across the world as a midshipman and lieutenant in His Majesty’s Navy. Robert Sayer served on several ships including the Ariadne and the Jupiter, also, most remarkably, HMS Victory. Enclosed within the volume is his original commission appointing him as lieutenant to the Victory in 1828 as well as transcripts of letters sent and received, many of which refer to the ships on which Sayer served. The volume makes for fascinating reading, revealing issues relating to naval appointments, skirmishes with French vessels and on-board punishments.

Sayer ventured both across Europe and to far flung lands including North and South America, the Marquesas Islands, Pitcairn Islands and Easter Island. A small, rather crudely made chest of drawers, the contents of which belied their container and reflected the extent of these journeys, was also brought in by the family.

In two of the drawers lies an extensive collection of shells large and small. Another drawer holds an array of mineral specimens, most of them labelled with their origin. Copper ore from Bolivia, silver ore from Chile and specimens from San Francisco sit in their appointed places in the chest. Some of the most personal and evocative items sit side by side in a single drawer. Several folded pieces of parchment contain locks of hair and are neatly labelled. One parcel reads: ‘Hair of a female that swam aboard… at Easter Island March 6th 1830’; another ‘Hair of a chief’s daughter that occasionally swam on board …. at one of the Marquesas Isles April 1st 1830’. Of great historical interest is the signature of John Quintell found within one of these folded papers. John was almost certainly the son of Matthew Quintell, one of the few survivors of the famous mutiny on the 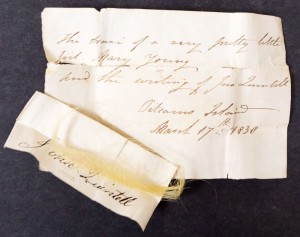 Bounty who, along with the other mutineers, settled on Pitcairn Island; the lock of hair is that of ‘a very pretty girl’ by the name of Mary Young, the surname of another bounty survivor and very likely the daughter of Ned Young who, along with John Adams, murdered Matthew Quintell with an axe! 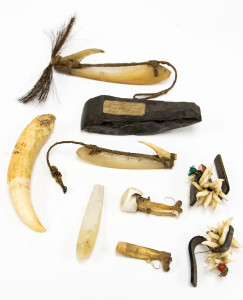 Other relics of his voyages include rare porpoise tooth decorative items from the Marquesas Islands, a stone chisel from Pitcairn and Sayer’s Naval General Service Medal with Java bar. A miniature hand written book displaying prevalent attitudes to race also feature in this eclectic mix. Of particular note are three Polynesian mother-of pearl fish hooks, two complete, one damaged. Early hooks of this type feature in the Cook-Forster Collection housed in The National Museum of Australia; in 2011 one similar fish hook went under the hammer in New York with an estimate of $3,000 to $5,000!

Also discovered in the chest was ‘A piece of Queen Victoria’s wedding cake,’ which was found wrapped in a piece of parchment paper inscribed by Robert Sayer. The piece of cake will be sold separately on Friday 1st April and is expected to make up to £100 (Lot 632A).

Charles Hanson, Managing Director of Hansons Auctioneers said, “It is quite remarkable to find materials from the same family which reflect so dramatically the contrasting lives of men and women of the early Nineteenth Century. Any document relating to the Victory is a delight to find but to also have artefacts with such provenance from Easter Island, Pitcairn, the Marquesas and the Americas is extraordinary.”