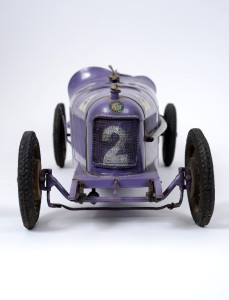 A child’s French clockwork Alfa Romeo racing car, dating from the mid 1920’s, sold for £13,640 in the Charterhouse Collectors auction in mid-March.

“It was always going to make big money, but thought the pre-sale estimate of £3,000-5,000 punchy enough!” Commented Richard Bromell. “Over the past 30 years I have seen only a handful of these marvellous tinplate clockwork Alfa Romeo racing cars and they have usually sold for up to £3,000. However, this one was in a very original condition and finished in a rare lavender colour rather than the usual red, silver and orange cars produced. This combined with a pro-active marketing campaign helped it sell for such as staggering sum.” 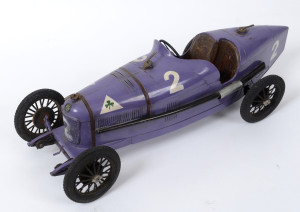 On the day, there was live internet bidding from Australia going head-to-head with a private collector who drove down to Sherborne from Ispwich. He initially booked a telephone line for the lot, but was too excited and made the 220 mile journey arriving at Charterhouse by 8.30am. Unfortunately for both the Australian internet bidder and the Ipswich collector, Charterhouse had had huge interest from many other parties and there was a bank of 10 other telephone bidders equally keen to secure the car. These included a collector who was racing his classic car at Goodwood and another buyer who was away on holiday and instructed his office to bid, and it was this holiday-maker who secured the lot.

Charterhouse said that the owner of the clockwork car had inherited it from his grandfather, and was left in state of shock when the hammer eventually fell.