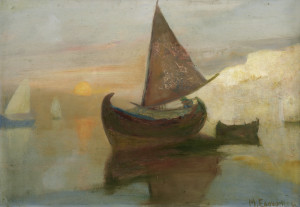 Fishing under the moonlight by Constantinos Volanakis is estimated at £30,000-40,000.  Volanakis (1837-1907), known as the father of Greek seascape painting, executed the work in 1878 when he was at the height of his powers. Nine years earlier – in 1869 – he had taken first prize in an international drawing competition sponsored by the Austro-Hungarian Emperor Franz Joseph to mark the Austrian Navy’s victory at the Battle of Lissa in 1866.

Volanakis was awarded 1,000 gold florins and free travel with the Austrian navy for three years. The work he produced during that time established his reputation as the foremost Greek marine painter of his age and set the benchmark for future generations of Greek painters.

Vasilios Chatzis (1870-1915) was a pupil of Volanakis. His Seascape/The destroyer Thyella, estimated at £30,000-40,000, demonstrates the qualities which led some critics to claim that he rivalled his master in virtuosity. The son of a ship-owner, Chatzis had a detailed working knowledge of ships which is evident in his paintings. He also, however, had an appreciation of the power of the elements and is credited with leading Greek marine art away from studio based academic purity towards a more spontaneous depiction of the drama of  life at sea.

In Fishing boats at sunset by Michalis Economou (1888-1933), the artist shows boats floating peacefully in shallow waters.  Estimated at £20,000-30,000, the work favours lyrical feeling over detailed depiction leaving the impression of a moment recollected. A skillful blend of light and colour conveys the artist’s emotional response. Throughout his career, Economou was deeply concerned with the interplay between figures and their environment. In this late work he achieves a balanced unity between boats and sea.

Nikos Hadjikyriakos-Ghika (1906-1994), who highlighted the usage of geometric forms and juxtapositions of light and colour, combined with elements of nature and landscape, was very different from his predecessors in style and technique yet shared their drive to look behind the surface of everyday things – in Ghika’s own words, ‘to reach beyond.’ Fishing place by a lagoon, estimated at £50,000-70,000, draws on his knowledge of Byzantine laws of perspective and his deep respect for Greek folk art.

Olympia Pappa, from Bonhams Greek art department, said, “Being a country comprised of many islands, Greece’s seas have always played a vital role, both socio-economically and culturally. The power and beauty of the sea has been throughout time a great source of creative inspiration for Greek artists. We are very fortunate to have these four outstanding paintings in the sale which illustrate so well the diverse treatment and development of Greek seascape painting.”